The People, Yes: Where to? what next? 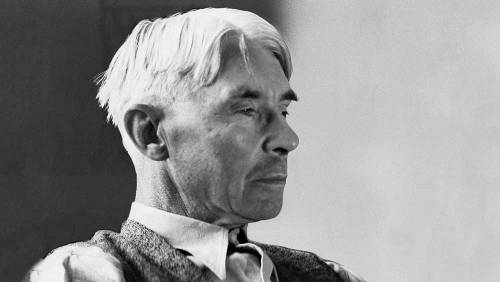 “The People, Yes, an epic prose-poem, is in many ways the culmination of Carl Sandburg’s work as a poet and is believed by Lilian Sandburg to be his favorite work. He crafted it over an eight-year period, fusing the American vernacular with the details of history and contemporary events….Believing that economic inequity lay at the root of all social injustice, from labor conflict to racial and civil strife, he responded to the economic and social upheavals of the 1930s with The People, Yes.”
Carl Sandburg Home, National Parks Service

“Sandburg had a subject—and the subject was belief in man.”
Archibald MacLeish at the Carl Sandburg Memorial

The people so often sleepy, weary, enigmatic,
is a vast huddle with many units saying:
“I earn my living.
I make enough to get by
and it takes all my time.
If I had more time
I could do more for myself
and maybe for others.
I could read and study
and talk things over
and find out about things.
It takes time.
I wish I had the time.”

The people is a tragic and comic two-face:
hero and hoodlum: phantom and gorilla twisting
to moan with a gargoyle mouth: “They
buy me and sell me . . . it’s a game . . .
sometime I’ll break loose . . .”
Once having marched
Over the margins of animal necessity,
Over the grim line of sheer subsistence
Then man came
To the deeper rituals of his bones,
To the lights lighter than any bones,
To the time for thinking things over,
To the dance, the song, the story,
Or the hours given over to dreaming,
Once having so marched

Between the finite limitations of the five senses
and the endless yearnings of man for the beyond
the people hold to the humdrum bidding of work and food
while reaching out when it comes their way
for lights beyond the prisms of the five senses,
for keepsakes lasting beyond any hunger or death.
This reaching is alive.
The panderers and liars have violated and smutted it.
Yet this reaching is alive yet
for lights and keepsakes.

The people know the salt of the sea
and the strength of the winds
lashing the corners of the earth.
The people take the earth
as a tomb of rest and a cradle of hope.
Who else speaks for the Family of Man?
They are in tune and step
with constellations of universal law.
The people is a polychrome,
spectrum and a prism
held in a moving monolith,
a console organ of changing themes,
a clavilux of color poems
wherein the sea offers fog
and the fog moves off in rain
and the labrador sunset shortens
to a nocturne of clear stars
serene over the shot spray
of northern lights.

The steel mill sky is alive.
The fire breaks white and zigzag
shot on a gun-metal gloaming.
Man is a long time coming.
Man will yet win.
Brother may yet line up with brother:

This old anvil laughs at many broken hammers.
There are men who can’t be bought.
The fireborn are at home in fire.
The stars make no noise.
You can’t hinder the wind from blowing.
Time is a great teacher.
Who can live without hope?

In the darkness with a great bundle of grief
the people march.
In the night, and overhead a shovel of stars for
keeps, the people march:
“Where to? what next?”