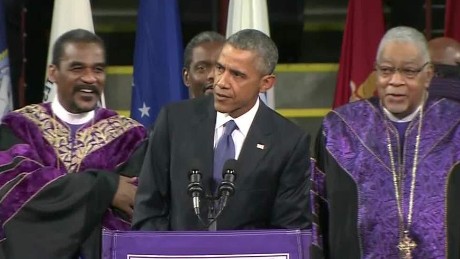 Almost always, the great speech is also the right speech.

President Obama’s eulogy for Rev. Clementa Pinckney and the eight other victims in Charleston was great and right.

We are accustomed these days to speeches from leaders and wannabe leaders that are mediocre and content-free, and if there is content it is calculated, self-serving, and passion-free. Welcome to this or mostly any other presidential contest.

Of course, Barack Obama is the exception to the run of the political mill. In fact his sometimes supernatural rhetoric ended up being a burden, as some wondered whether he was all talk and no action. Without getting into the measure of his still unfinished presidency, which this week looks pretty good, remember that under the right circumstances talk is also action, when action means talking about the thing that needs doing.

I’ve written before about my beloved Barbara Jordan, maybe the greatest American orator of the late 20th century, with multiple entries on the list of all time speeches. Before the eulogy, it may not have been clear where and if Obama belonged in that pantheon. If it wasn’t before, that has now been settled.

The eulogy was everything it could and should have been. It was a painting of a significant scene by a skilled and inspired artist. Like a great painting, it is more than even the greatest photograph can show us. Look here, he said, think about this, remember this, all the while appealing to the heart and soul of his audience and of the nation. We have watched hours of news coverage of the events in Charleston, reviewed and analyzed and opined upon. But the magic of a speech or a painting is that by adding words and pictures, the obstacles to our really seeing are removed, the scales fall away, and we look as if for the first time. And with that vision, maybe move on to act wisely and appropriately. 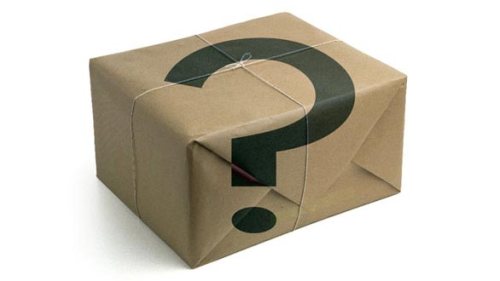 The Supreme Court has turned back the latest challenge to the legality of Obamacare. Republicans have returned to their mantra of “repeal and replace,” if only they can have the White House and Congress.

This is not to discuss the merits, wisdom or effectiveness of the Affordable Care Act. It is just to ask a basic and obvious question: If after five years the Republicans have replacement plans, what and where are they?

It appears, as is common in partisan politics, that a snappy slogan is meant to preempt any thoughtfulness or inquiry, let alone actual proposals. In this case, it would be great to have seen a comprehensive alternative plan. But that would mean actually devising a plan that would be politically palatable and effective. Which, as far as we can tell, hasn’t yet happened.

It’s a matter of trust, as in, trust us. But it was none other than Republican icon Ronald Reagan who said, “Trust but verify.” And it was the most recent Republican President George W. Bush who said, “Fool me once, shame on you. Fool me twice……you can’t fool me again.”

The Pope’s new encyclical, Laudato Si’, has been much in the news. Whatever you’ve heard about it, if you haven’t seen it, you really don’t know the whole story.

You’ve heard it is about the environment and climate change, which is in small part true. You’ve heard Catholic presidential hopefuls such as Jeb Bush and Bobby Jindal admonish the Pope, their spiritual father, telling him to stick to religion and stay out of politics.

The encyclical is much bigger than climate change, the environment, and certainly bigger than Bush or Jindal or dozens of politicians. It is a big statement about the moral and religious shortcomings of this modern world and us modern people. You don’t have to be Catholic or Christian or faithful or religious to read and appreciate it. You just have to read it.

It is full of inconvenient and uncomfortable truths. Which is probably why the coverage has focused on the environmental exhortations, rather than on the broader cultural, media, technological and social ones. In essence, it is nothing less than a call for radical evolution, in the spirit of the radical evolutionary upon whom the church is built. There are plenty of established institutions and powerful interests and individuals, including the media, who could be forced to change if such radical evolution came to pass. And many of them don’t want to change, and don’t even want us to listen to the Pope talking about it.

The encyclical is a long and deep but very readable work. Download it, sample it. You don’t have to read it all, or all at once. It is naturally grounded in theology, and in some particular theology, but be assured that the observations and conclusions don’t require you to hold any sectarian beliefs. It only requires that we believe that things are far from perfect, and that after we take a close look at ourselves and others, we believe that we have the power and obligation to make things better.

It is filled with so much quotable inspired thought and inspiration. Here is just one brief excerpt:

114. All of this shows the urgent need for us to move forward in a bold cultural revolution. Science and technology are not neutral; from the beginning to the end of a process, various intentions and possibilities are in play and can take on distinct shapes. Nobody is suggesting a return to the Stone Age, but we do need to slow down and look at reality in a different way, to appropriate the positive and sustainable progress which has been made, but also to recover the values and the great goals swept away by our unrestrained delusions of grandeur.

Renouncing Hate as a Political Weapon

Hate is a part of our human experience, as hater and hated. We hope and try to minimize or even eliminate it, but at least a little, there it has been and there it is.

Some will say that its ugliest manifestation is the sort of thing we see in Charleston and in similar incidents. But maybe even uglier, and maybe louder and more common, is the use of hate as a political weapon, sometimes by some very high level and ambitious and otherwise respected political leaders and aspirants.

It may not look like hate. It may be clothed in high-minded rhetoric and ideology. But at its heart, the expressions of how awful, how ungodly, the persons and positions of political enemies are is nothing less than hateful. Hate and intolerance in a good cause, the perpetrators will argue. But hate nonetheless.

We can no more eliminate hate then we can its brighter correlates of love, understanding and compassion. But the least we can ask of those in positions of power and authority, and of those who strive for even higher positions, is to renounce hate as a weapon. They don’t have to go all soft and lovey. But they do have to forego spreading poison and thereby making poison acceptable. It isn’t, and when it becomes so, we shouldn’t be wondering where all the hate comes from. Politician or regular citizen, it comes from us.

The micro SD memory card I inserted into my tablet is now broken. Literally. Bent in two places. All the books, music and movies on it cannot be accessed. (How it got that way is another story. Also, all you cloud storage lovers can please be quiet about “This is why cloud storage is so much better.” I like my local electrons.)

This is not a tragedy in so many ways: compared to the rest of the world, the rest of my life, the rest of my digital life. None of the media was lost; it is simply a matter of loading a new card with any of them.

Micro SD cards are very small and delicate, but powerful. The size of thumbnail, this one had 32 GB (gigabyte) of memory. The average book is less than 1 MB (megabyte), a music track around 5 MB. One GB is about 1,000 MB. Not that I had a thousand books on that broken card (more like a few hundred), but I could have.

This is an opportunity. Rather than ask the memory card to remember all sorts of books that I might have loaded because I liked them a little or liked them once or thought them possibly interesting, but never actually got around to any more if at all, I will load the new card slowly and carefully, one by one, starting with those books that have meaning for me that is essential or nearly so. The moment I realized I was going to be starting over, I knew almost exactly which those were. Rather than desert island books, these are my broken memory card books.

There are metaphors about memory here, some pretty interesting ones, and you might have fun playing around with them. I might have time to do that too. But right now, I have put in a new card, and I’m about to load the first book. It won’t last forever as the only book on my tablet, but for now, it will be the center of my reading universe—a status it deserves.