When I saw that a number of readers have been viewing my Record Store Day posts from years past, I realized that I had missed this year’s celebration (April 22).

So here’s a message: If you think that the diminishing presence of record stores, and their cultural sisters book stores, is not a problem for civilization and society, you are wrong. That is not nostalgia; it is the truth. The world is a better place with lots of music lovers hanging out together in record stores and lots of book lovers hanging out together in book stores. If you are a music lover or a book lover, and you have never hung out with your kindred live in a lively non-virtual space, you are missing something. Seize the experience.

Dirt on the Rug 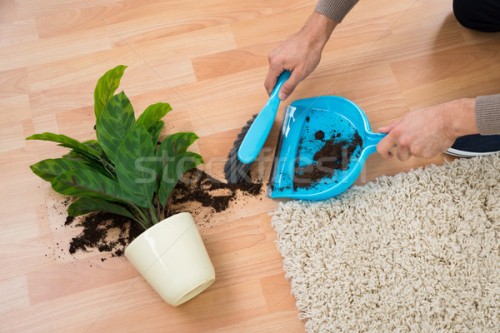 Dirt on the Rug

New CEO: “I thought it would be easier.”

Imagine that you hired a new CEO for your very, very big company (annual budget: $3.8 trillion). The job he takes is universally considered the most difficult job in the world.

Imagine that in his early days, he demonstrated some serious gaps in his knowledge and ability to do the job.

Then imagine the new CEO is interviewed and says this:

Knowing Back Not Going Back 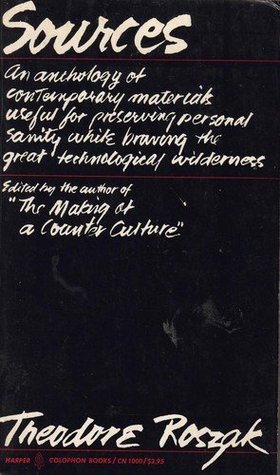 Now there’s more to do than watch my sailboat glide
But every day can be a magic carpet ride
A little bit of courage is all we lack
So catch me if you can, I’m goin’ back
Goin’ Back, Gerry Goffin & Carole King

You can’t drive a car forward looking in the rear view mirror. That’s how you crash.

But if you are someone who swam in the idiot wise sea of a different time, not really so long ago, you look at some of the riches that you caught floating by, open this or that broken-binding book and say: we might use this now. They might use this now, if it wasn’t considered so old and out of touch with now. Not to mention out of print and out of mind.

What goes round comes round, or might just go away. Too bad, because great tools don’t go out of style. People just forget they’re there.

The chance of an asteroid
Hurtling toward earth and
Hitting it doesn’t hit
Even the misses are few.
Odds are better
A fragment hits
Leaving lasting spirit
But loose memory
Almost lapsed memory
Lingering.

Look at the assembly
Recognize the parts
And their provenance.
Once in the while
An early element
Arrives and sits down.
Good to see you.
And you.
It’s like it never left. 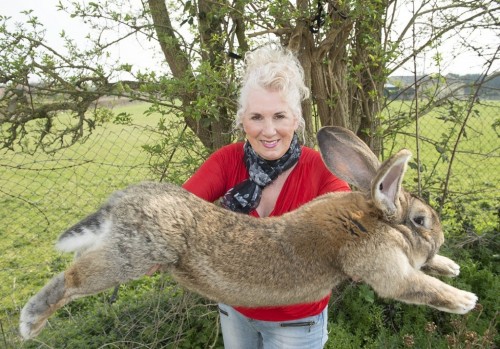 Oh, sometimes I think I must go mad. Where will it all end?
Groucho Marx as Professor Quincy Adams Wagstaff in Horse Feathers (1932)

Here is the summary: A woman in the UK raises giant rabbits. Darius is 4 feet, 4 inches long, a Guinness World Record (see photo above). His 10-month-old son Simon is already 3 feet 5 inches long. Simon was sold to a buyer in Chicago and shipped via United Airlines. Simon died sometime during the trip.

Not a day goes by that doesn’t hint at some degree of craziness, or scream about it. Maybe it is always like this or maybe we are now more sensitized to it from frequent exposure.

Where will it all end? 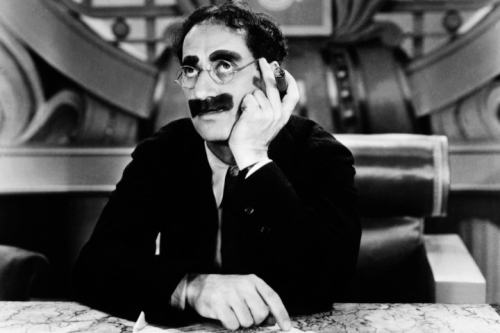 Minister of Finance: Here is the Treasury Department’s report, sir. I hope you’ll find it clear.
Rufus T. Firefly, President of Freedonia (Groucho Marx): Clear? Huh. Why a four-year-old child could understand this report. Run out and find me a four-year-old child, I can’t make head or tail of it.
Duck Soup (1933)

“Trump jokes about replacing Haley, takes it back” 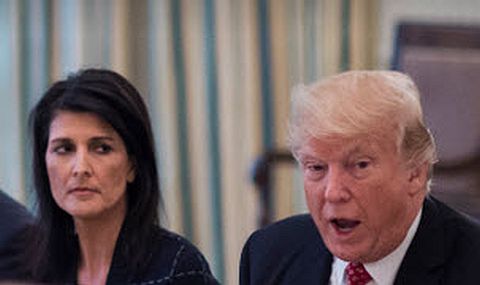 There was a bit of awkwardness at President Donald Trump’s lunch with U.N. diplomats when he made an undiplomatic comment about Nikki Haley, his ambassador to the U.N.

Trump was kicking off Monday’s lunch with ambassadors of countries on the U.N. Security Council when he asked the room if they liked Haley, the U.S. ambassador to the U.N.

Trump said that if they didn’t, “she could easily be replaced.”

The comment sparked some awkwardness, but seemed to be taken in jest. Haley and others gathered around the lengthy table laughed.

Above is a photo of Nikki Haley and Donald Trump at the lunch. 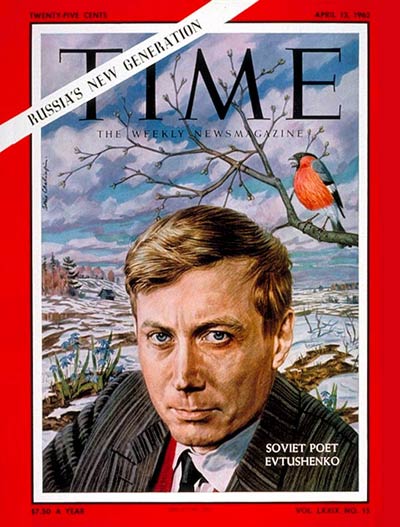 In looking for a poem to include, I discovered that the great poet Yevgeny Yevtushenko died this month at the age of 84. This news did not receive the sort of coverage it deserved. If ever a poet lived the life of poetry as insurgent art, he did.

Yevtushenko also wrote one of the definitive poems about the Holocaust. From the Guardian:

Yevtushenko gained notoriety in the former Soviet Union while in his 20s, with poetry denouncing Joseph Stalin. He gained international acclaim as a young revolutionary with Babi Yar, an unflinching 1961 poem that told of the slaughter of nearly 34,000 Jews by the Nazis and denounced the antisemitism that had spread throughout the Soviet Union.

Until Babi Yar was published, the history of the massacre was shrouded in the fog of the cold war….

Yevtushenko said he wrote the poem after visiting the site of the mass killings in Kiev, Ukraine, and searching for something memorializing what happened there – a sign, a tombstone, some kind of historical marker – but finding nothing.

“I was so shocked,” he said. “I was absolutely shocked when I saw it, that people didn’t keep a memory about it.”

It took him two hours to write the poem that begins: “No monument stands over Babi Yar. A drop sheer as a crude gravestone. I am afraid.”

No monument stands over Babi Yar.
A drop sheer as a crude gravestone.
I am afraid.
Today I am as old in years
as all the Jewish people.
Now I seem to be
a Jew.
Here I plod through ancient Egypt.
Here I perish crucified on the cross,
and to this day I bear the scars of nails.
I seem to be
Dreyfus.
The Philistine
is both informer and judge.
I am behind bars.
Beset on every side.
Hounded,
spat on,
slandered.

Squealing, dainty ladies in flounced Brussels lace
stick their parasols into my face.
I seem to be then
a young boy in Byelostok.
Blood runs, spilling over the floors.
The barroom rabble-rousers
give off a stench of vodka and onion.
A boot kicks me aside, helpless.
In vain I plead with these pogrom bullies.
While they jeer and shout,
‘Beat the Yids. Save Russia!’
Some grain-marketer beats up my mother.
O my Russian people!
I know
you
are international to the core.
But those with unclean hands
have often made a jingle of your purest name.
I know the goodness of my land.
How vile these antisemites—
without a qualm
they pompously called themselves
the Union of the Russian People!

I seem to be
Anne Frank
transparent
as a branch in April.
And I love.
And have no need of phrases.
My need
is that we gaze into each other.
How little we can see
or smell!
We are denied the leaves,
we are denied the sky.
Yet we can do so much—
tenderly
embrace each other in a darkened room.
They’re coming here?
Be not afraid. Those are the booming
sounds of spring:
spring is coming here.
Come then to me.
Quick, give me your lips.
Are they smashing down the door?
No, it’s the ice breaking . . .
The wild grasses rustle over Babi Yar.
The trees look ominous,
like judges.
Here all things scream silently,
and, baring my head,
slowly I feel myself
turning grey.
And I myself
am one massive, soundless scream
above the thousand thousand buried here.
I am
each old man
here shot dead.
I am
every child
here shot dead.
Nothing in me
shall ever forget!
The ‘Internationale,’ let it
thunder
when the last antisemite on earth
is buried for ever.
In my blood there is no Jewish blood.
In their callous rage, all antisemites
must hate me now as a Jew.
For that reason
I am a true Russian! 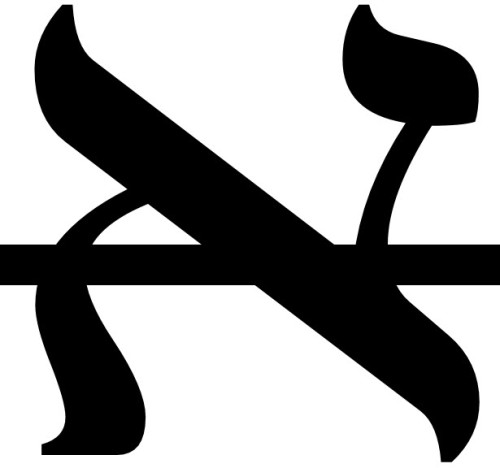