“Mental-health professionals say that no single event since the second world war has left so many people in so many places traumatised at once.”

Mental-health professionals say that no single event since the second world war has left so many people in so many places traumatised at once.
The Economist, August 29th, 2020 (The common tragedy: Worldwide covid-19 is causing a new form of collective trauma)

That one sentence from the current issue of The Economist stunned me. I reread it several times. It is not surprising, given first-hand experience or second-hand reports. That doesn’t make it any less startling.

Just as the diminishing or outright dismissal of the pandemic continues to be dangerous and deadly, so will any similar delusion, as a second “invisible enemy” is following in the steps of the virus.

More from The Economist:

For some, the second half of 2020 will bring much-needed relief. For the time being the number of new recorded global infections has plateaued. In many countries it has dropped dramatically. Yet for those places hit hardest, a full recovery will depend on more than getting the virus under control. In a world paralysed by death, survivors are everywhere: icu patients who faced the horror of covid-19 first-hand, doctors and nurses who cared for them, relatives forced to mourn over WhatsApp and Zoom, families who lost their livelihoods. Mental-health professionals say that no single event since the second world war has left so many people in so many places traumatised at once. How people fare in the months and years ahead will depend partly on how their countries—and, more importantly, their communities—respond….

There were no large-scale psychological studies during the first or the second world wars, though the Holocaust would become the event most deeply associated with mass death and grief. Researchers in the early 2000s found roughly half of Holocaust survivors were still suffering from ptsd. Many had other disorders such as schizophrenia. Even among non-Jewish Europeans who were children during the war, 10-40% still had ptsd symptoms. In communities of survivors, research has shown that “inherited trauma” can be passed to subsequent generations, by growing up flooded with their parents’ memories, and possibly, through genes.

The suffering caused by covid-19 falls far short of the horrors of the Holocaust. Still, Krzysztof Kaniasty, a psychologist and disaster expert, points out that the pandemic presents nearly all the risk factors for ptsd. It has caused sudden death, life-changing events, large-scale social ruptures and chronic stressors like uncertainty and the added hassles of daily life.

The luckiest will suffer mildly from one or two of these effects. Yet more than at any other point in recent history, millions of people have been slammed by all of them….

There is a danger that political divisions, social distancing and economic woes will over time lead to a loss of togetherness in the same way that displacement after the Buffalo Creek flood gave “a degree of permanence to what might otherwise have been a transitional state of shock”, in the words of Mr Erikson. Communities cannot grieve together because the disaster is ongoing and the threat has yet to disappear, says Judith Lewis Herman, a psychiatry professor at Harvard Medical School. She describes three stages of healing: re-establishing safety, remembrance and mourning, and reconnecting with others. Social distancing complicates all of them.

And so like the pandemic itself, the psychological fallout will require assessment and adaptation. Many doctors are still focused on saving lives, but governments and mental-health professionals should start thinking about “psycho-social” interventions.

The British imposed harsh law and order on the American colonists

It is historically and philosophically strange that Republicans and their supporters make such a big deal about law and order as a patriotic imperative. Of course many of the extreme law and order types don’t seem much like historians or philosophers.

The British worried that the American colonists were getting much too independent and too insistent on their rights. At the last British National Convention (BNC) held in the colonies, speaker after speaker demanded law and order, lest the colonists start getting ideas and moving into the British neighborhoods.

Okay, there wasn’t actually a BNC. But the British did fear change and a loss of control, did look down on the inferior colonists, and did use law and order as a chief weapon to maintain the status quo.

So the next time you hear the law and order pitch, know that these Republicans would have been on the side of the British rather than on the side of our fighting founders. Kind of un-American, don’t you think?

Much of the world has had personal experience, historic or current, with authoritarian leaders: more benign in the form of enlightened monarchies or more dangerous in the form of pure dictatorships.

Not America. That’s why observers who saw the first signs of authoritarianism from the start of the Trump administration were mostly dismissed as alarmist or paranoid. Even at this late date, two months before the election, almost four years into the presidency, some of that dismissal continues, even though the evidence has gone from suggestive to definitive.

Authoritarianism happens to the greatest nations—precisely because people think their brand of democracy is too good to fail. Tragically, that isn’t how it works.

Between shade and sill
a sliver of not yet sunrise
nudges black to gray
hints at objects in the room
unsleeping in the dark.

It is natural in America to look at an economic recovery in American terms. The impact of the economic crisis is here and any solutions will be applied here.

But failing to notice how catastrophic the pandemic has been for economies around the world is shortsighted. Just as shortsighted as some high-level leader thinking that the pandemic would never reach our shores and that whatever the rest of the world was doing about it meant nothing for our (disastrous) strategy—or non-strategy.

No matter what you hear from a high-level leader (the same one who gave us the America-only non-strategy for the pandemic) this is more than ever a global economy. So as we follow the important details of the American economic situation, we should occasionally look in on the economic situations in Europe, Asia and the rest of the world. Some countries are doing a little better than others, while some countries are in a deep hole that is even worse than ours, and unlikely to recover for years. Does it matter for America? What do you think?

57% of Republicans say the number of U.S. coronavirus fatalities so far is acceptable. But that isn’t the only significant number.

In evaluating the U.S. efforts against the coronavirus pandemic, do you consider the number of U.S. fatalities from coronavirus so far to be Acceptable or Unacceptable

As striking as that Acceptable number is, it may not be the most significant number.

From the start of the Trump presidency, we have been trying to measure the “Trump base.” There have been many estimates, and like others, I have said that it was somewhere around 30%.

Now we have solid proof that this number is just about right. Separate from any judgments, merely acknowledging that some number of the deaths were preventable, if you believe that 175,000 Americans dead is “acceptable”, you are under the influence of some powerful force. And in this case, for that 31%, that force is Trump. They are the do-or-die base.

Knowing that the Trump base is 31% of Americans is valuable information. While it still doesn’t tell us anything definitive electorally, it does tell us, whoever wins, what we will be facing. One-third of America, however they were disposed before all this, now has a diametrically different vision of everything. This goes beyond the minority vision that Trump is somehow a good and effective president. It is an entirely different country than the other two-thirds lives in.

It’s going to be a bumpy–and for too many deadly–ride.

If everyone is lost
(they won’t admit it but they are)
why not get lost yourself
instead of following them?

Trump tells college football to follow his lead and play this fall. How well has following his lead worked out? 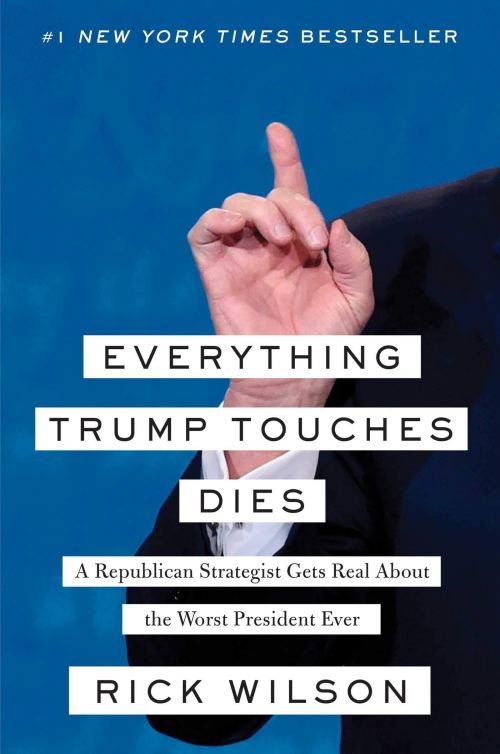 When Rick Wilson published his book Everything Trump Touches Dies, it seemed like the title was a metaphor, or maybe a polite way of saying that everything Trump touches turns to s***.

Anyway, the pandemic in America has proven that the title is literal, not figurative. Which leads to a question for college football. If Trump says that playing this fall is a good idea–that it is necessary–should you follow his lead? Or should you run as fast as possible in the opposite direction, given that his track record on the pandemic is so perfect–perfectly wrong?