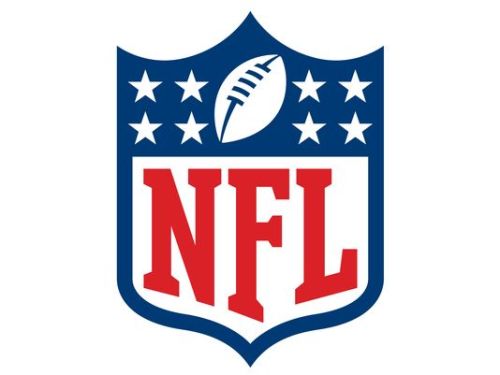 Which of these three NFL issues deserves the deepest continuous attention by the league, by fans, by the media, and by the public?

Note: It is possible that more scientists have been covered talking about the football that New England Patriots quarterback Tom Brady may have had deflated than about the concussions in the NFL. 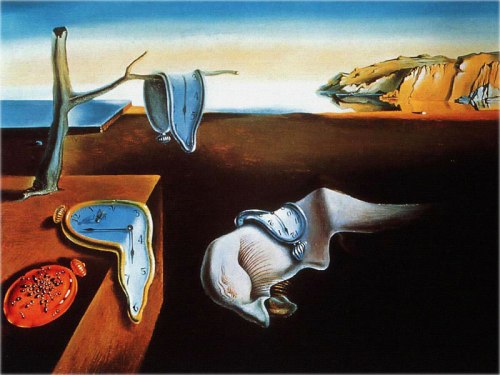 Driving down a country road, a man sees a farmer. The farmer is holding up a pig so that the pig can eat apples from a tree. The man stops and says to the farmer, “You know, that’s not very efficient. If you put the pig down, shook the tree and let the apples fall to the ground, it would save a lot of time.” The farmer says, “You may be right, but what’s time to a pig?”

The result of our thinginess is our blindness to all reality that fails to identify itself as a thing, as a matter of fact. This is obvious in our understanding of time, which, being thingless and insubstantial, appears to us as if it had no reality.

Indeed, we know what to do with space but do not know what to do about time, except to make it subservient to space. Most of us seem to labor for the sake of things of space. As a result we suffer from a deeply rooted dread of time and stand aghast when compelled to look into its face. Time to us is sarcasm, a slick treacherous monster with a jaw like a furnace incinerating every moment of our lives. Shrinking, therefore, from facing time, we escape for shelter to things of space. The intentions we are unable to carry out we deposit in space; possessions become the symbols of our repressions, jubilees of frustrations. But things of space are not fireproof; they only add fuel to the flames. Is the joy of possession an antidote to the terror of time which grows to be a dread of inevitable death? Things, when magnified, are forgeries of happiness, they are a threat to our very lives; we are more harassed than supported by the Frankensteins of spatial things.

It is impossible for man to shirk the problem of time. The more we think the more we realize: we cannot conquer time through space. We can only master time in time.

At the time the mountains were climbed and the rivers were crossed, you were present. Time is not separate from you, and as you are present, time does not go away.

The Value of Quiet

The value of quiet is directly proportional to the level of noise. Which means that quiet here and now in this noisy world is exponentially more valuable than it has ever been. Practically priceless. 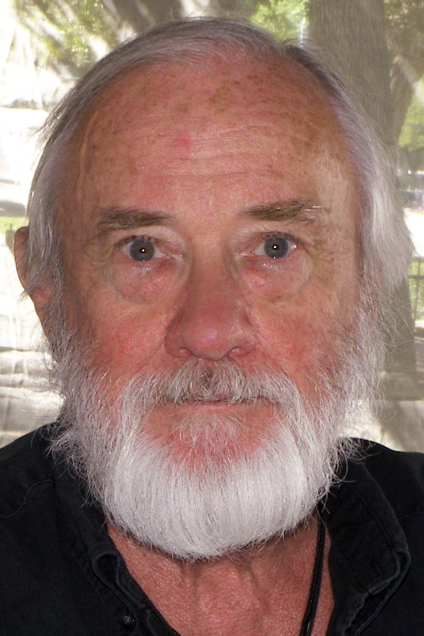 Author Robert Stone (1937-2015) died a couple of weeks ago. You may not know of him, but do celebrate his career by reading a little of his extraordinary work.

If you write, and if you read (which you should do, often and well, if you write), you may find yourself reading certain authors and saying: wow, I wish I could sound like that. Stone was one of those who had a voice so good that even when one of his many novels didn’t hit the mark, you still wanted to listen.

His most celebrated novel was his second, Dog Soldiers (1974), which Time magazine named to its list of the Best English-language Novels from 1923 to 2005. It may be the best novel written about the Vietnam War in America. It is a short, sharp, and compulsively readable take on the craziness and morality of it all. Compare to Francis Ford’s Coppola’s film Apocalypse Now, also great, but big and spectacular, taking millions of dollars to do what Stone did in a few thousand words. (Speaking of movies, the film version of Dog Soldiers, called Who’ll Stop the Rain, is worth seeing only as evidence of the how great novels can and do go wrong on screen.)

Stone was interested in politics and government, particularly in the last quarter of the twentieth century, when those seemed to become unhinged and unmoored. People were becoming unhinged and unmoored too, but Stone never used his characters as mere stand-ins for ideas. He drew full-blooded, complex people.

He seemed to genuinely love people, even as they, and he, were at loose ends. If you like cultural history, read the memoir of his life and times in the early 1960s, Prime Green: Remembering the Sixties. It is a sketch of his role as a writer and traveler in the early counterculture, and while it is a very small picture, his honesty and self-awareness are refreshing and appealing.

Back to novels, if you do read Dog Soldiers and want more, try A Flag for Sunrise (1981). While the general topic of this political thriller is turbulent military and foreign policy in Latin America at that time, the subtext is timeless and global—as in, none of the issues has gone away, or will. 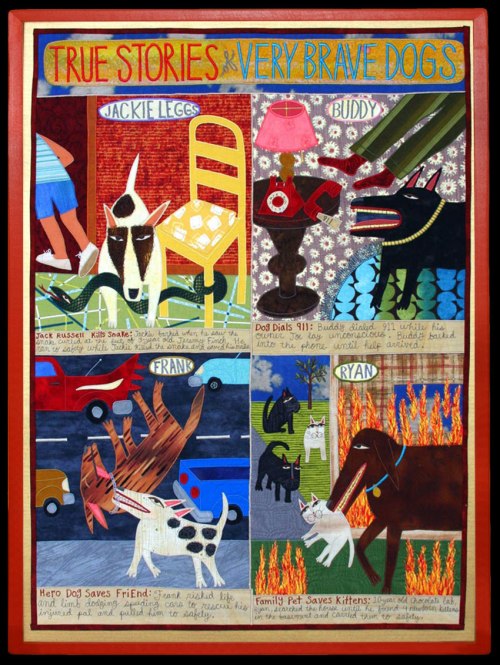 Having just discovered her work, I would say much more. But instead I’ll just say that she works in fabric. That she does what artists should do: delight you, inspire you, deliver the combination of joy and thoughtfulness that can be mistaken for mere craft or whimsy but is nothing less than art. 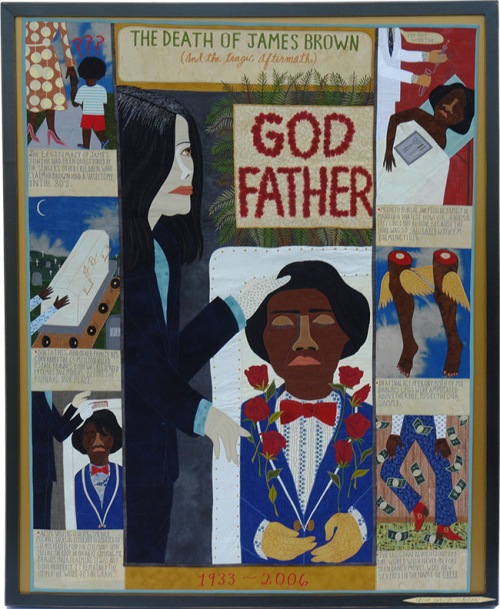 Only a few examples are shown here, but just visit the website of the Antieau Gallery. Visit the gallery on Royal Street in New Orleans (as if you need an excuse to visit New Orleans). See her work at various museums or at the homes of folks such as Oprah Winfrey or Bill Clinton, if you happen to be visiting them. You will be delighted you did. 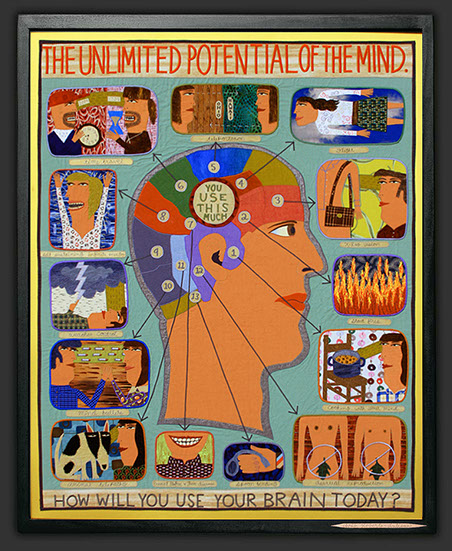 We lose friends lots of ways. One tragic way is to allow friendship to fade over time.

Friendship is treated and valued differently by everyone. It is personal, individual, no right or wrong for everyone, no better or worse for everyone.

Friendships often begin by chance and happenstance, but then require intention, attention, and maintenance. The easy beginning is one reason we forget that, as we forget many important matters while tending to the inconsequential.

Friendships, of a certain deep kind, are able to seemingly pick up the moment a lapsed connection is renewed, even after years. It shows that the tissue of the original connection was so strong, so almost meant to be, that it could withstand neglect.

But that realization is bittersweet. In it are the lost laughs and mutual mirror and sharing that might have been. And that ultimately, at some point, might be no more.

Is it hypocritical to remind others to cherish and cultivate friendship, when you yourself have left some—many—of those struggling on the vine? Then consider it a morsel of wisdom and cautionary tale. You may have lots of friends or few. They may be friendships that are deep or shallow, new or aged. But if you look inside to see just what kind of friend and friendship it is, you will know. And if it is that special sort of friend and friendship, consider how unique it might be for you, how that friend is a piece of a treasure you maybe stumbled upon and can’t replace and won’t replace.

This Christmas I learned, in reply to a holiday message to a too much ignored friend, that he is dying. I tried hard not to be self-centered, thinking about what I had lost, the years of conversations that could have been had, that I missed, that would have been a joy. He was losing his life, and the petty me was sad for having missed what I might have, with a little more effort, had.

You can rationalize these lapses as the way things happen and the way life goes. You can say, as long lost friends often do, that it goes both ways, that A is just as capable as B of picking up the phone or sending an email. But as with all our sensible perspectives, sense doesn’t matter.

For what it is worth, here is the message I sent out to him that got the reply from his wife. It may sound like I knew something about what was going on in his life, and maybe I did. Maybe I just knew that all of us are dying. Mostly I knew what I know about true treasure and how tricky it can be to find and keep it. So keep it, please.

I don’t know what to say about the passage of time. But we both know, or at least I hold the conceit, that some friendships survive that, even if not well tended. Maybe I’m wrong. Don’t know how much if at all I am any part of you, but you, my friend, are always a part of me.

No New Year resolutions for me, for many reasons. Here is a related thought from Shunryu Suzuki Roshi:

When we reflect on what we are doing in our everyday life, we are always ashamed of ourselves. One of my students wrote to me saying, “You sent me a calendar, and I am trying to follow the good mottoes which appear on each page. But the year has hardly begun, and already I have failed!” Dogen-zenji said, “Shoshaku jushaku.” Shaku generally means “mistake” or “wrong.” Shoshaku jushaku means “to succeed wrong with wrong,” or one continuous mistake. According to Dogen, one continuous mistake can also be Zen. A Zen master’s life could be said to be so many years of shoshaku jushaku. This means so many years of one single-minded effort.

It is hard to talk about what is and isn’t nonsense. Waiting with anticipation for the new season of your favorite TV series or playing games is not necessarily more nonsense than discussing political affairs. And don’t even get started on food and sex, which can be critically important, nonsense, or both at the same time.

It is a matter of attention, depth, and priority appropriate for you at the time. A way to determine this is discernment, keeping just quiet enough to hear the voices coming from above, below, outside, and especially inside, that suggest just how much of what might be good for you.

Examples abound. More than ever, there is the theoretical possibility of paying attention to just about everything, and no possibility—even with multi-sensing capabilities we are equipped with—of actually doing it. Even when you do limit and choose, you may find that the coverage or talk is just repeating versions of the same stuff—nonsense—over and over, without its going much of anywhere except around in circles.

So for me—call it a wish or a perspective or a direction but not a resolution—I will try to discern who and what matters, pay better attention to those, and avoid some of the rest. This is not necessarily a matter of serious or world-changing: the new seasons of Downtown Abbey and Mad Men will have my attention. But as things come along, I will try to listen to just which way they might be moving me. Just a little less nonsense.