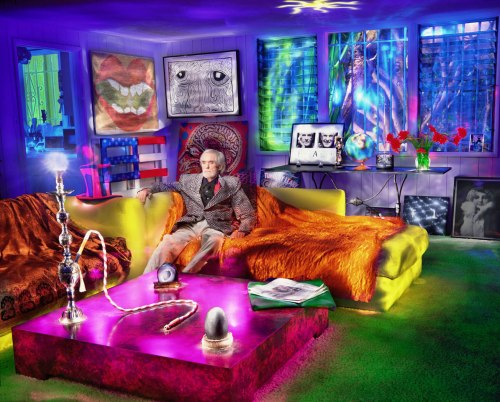 Dean Chamberlain is an extraordinary photographic artist. He works in a technique known as light painting, using hand-held lights to illuminate and color a scene photographed in long exposure. While versions of the technique have been known and used since the early days of photography, Dean was the first artist to work exclusively in the medium.

Dean Chamberlain is the father of light painting photography and has been capturing photographs since 1967. It was his passion for photography that led him to the Rochester Institute of Technology in 1974 to pursue a fine art degree. During Dean’s time at Rochester in 1977 he discovered light painting photography. Dean was the first person to coin the term “Light Painting” for his open shutter long exposure photographic technique. He has worked with his unique art form ever since in his various works. Dean has created stunning portraits of well-known individuals such as David Bowie and Paul McCartney. He has also directed numerous music videos. Chamberlain’s work has appeared in publications such as Esquire, Vanity Fair and the Washington Post. He has received an MTV breakthrough award for directing music videos for Arcadia (Missing), Paul McCartney (This One) and Duran Duran (All She Wants Is).

Along with light painting rock stars, landscapes and other subjects, Dean created a unique series called Elder Psychedelic Pioneers. This includes Timothy Leary, Albert Hofmann, Alexander Shulgin, and others—many of whom have now passed on. 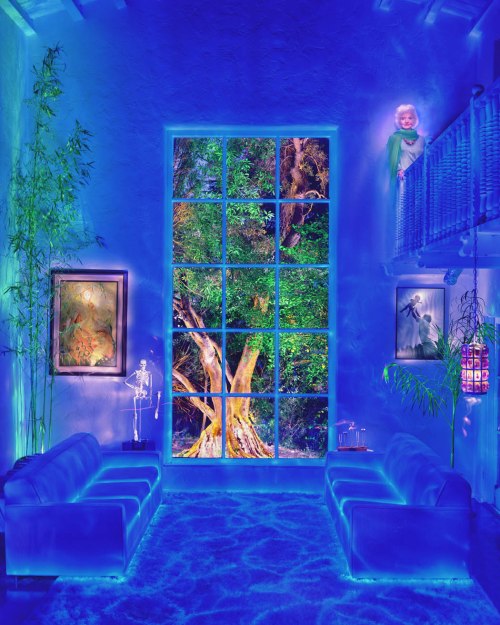 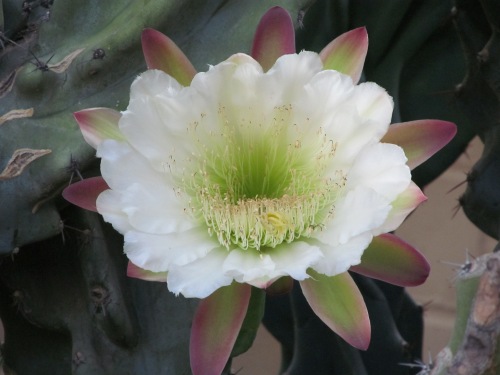 The rare rains have come and gone.
Only in the first hours of the dry sun day
splendid petals unfold then hide.
Catch them capture them
with words brush or camera?
We are as arrogant and grateful
as they are beautiful.

Imagine it is 2024. Trump is finishing out his second term as president. Eight years.

In a detailed and complex way, we may wonder what the lives of people in America and the world have been like during those years, day after day, thanks to his presidency. Wondering what we might do, what we might have done, to enjoy a different outcome.

But there is simple wondering too. Even at this point in 2018, it is hard to avoid seeing his face every day. Which led me to wonder: what face will we be looking at every day in 2024?

It turns out that a graphic designer at the Express newspaper in the UK has already helped us imagine that: “The intriguing image [see above] has been meticulously constructed by a professional graphic design artist, who specialises in biometric techniques to age the human face.”

Beading is a glorious craft. In the hands of a talented artist, the results can be beautiful and enlightening.

But like all art, it can be a messy business. In the case of beads, this can mean tiny items underfoot, and with bits of wire, pretty painful ones. Particularly where barefoot is the custom.

A quick post-beading cleanup led to quite a collection of such detritus, like shells on a beach. Tossed in a white bowl, they looked like something. And so the photo above.

If you are a fan of randomness—and we should all be—you will see in this totally spontaneous display any number of things. Gregory Bateson said, “I am going to build a church someday. It will have a holy of holies and a holy of holy of holies, and in that ultimate box will be a random number table.” Exactly.

Here is a beader in her natural habitat, the largest bead store in New York. It is filled with beads mostly from China which, as in most things, is able to provide whatever we want or need in seemingly infinite supply. So it is all together: geopolitics, economics, ancient tradition, minerals, pottery, glass, color, art, craft, and, of course, beauty. Note, however, that in this emporium, the beauty of the beader outshines all of the beads.

Can’t See the Trees for the Sky

Sometimes we look a little too high.

The sky at dawn was unusual and spectacular this morning, a horizon of heavy clouds tinged with orange. I took some photos, hoping to capture it. Satisfied, I shut down the camera and started walking away. Then stopped.

In my focus on the picture-worthy sky, I had kind of missed the trees. Maybe I was just still asleep. But not when I noticed this. And all I had to do was look a little lower. 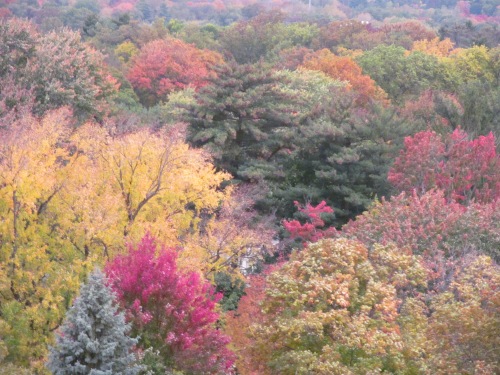 The Oxford English Dictionary has named “selfie” the Word of the Year. At least one journalist covering this issue spoke in praise of the selfie, offering a few rationales:

Selfies are in the centuries-old tradition of artists making self-portraits.

This is an age of memoirs and selfies are part of this phenomenon.

So for all those who do take cover in these explanations, be aware:

Above are self-portraits by two modern masters of photography, Diane Arbus and Robert Mapplethorpe. Photography is blessedly democratic, easy and fun. But when looking at any of the millions of selfies, consider whether artistry applies.

As for modern memoirism, chronicling every moment, whether overshared or not, we might be looking at the range of those chronicles, from deeply examined reviews to diaries to nothing more than barely annotated calendars. Here are some questions:

Would you rather have your good, great and remarkable moments go unnoted and unrecorded?

Or would you rather have your ordinary, unremarkable moments go public and get attention?

Or is the point of modern sharing to elevate ordinary life to a special place where it has always belonged?

Above is one of the photos taken by Dorothea Lange for the Farm Services Administration during the Depression. Shot in 1937, it is captioned “The cotton sharecropper’s unit is one mule and the land he can cultivate with a one-horse plow. Greene County, Georgia.”

The plow is a thing that made America what it is. Whether pushed by hand, or pulled by an animal or an engine, it embodies the hard work that helps bring food from the earth to feed a family or a nation, especially during hard times.

The gun is also a thing that made America what it is. Unlike the plow, about which there is little controversy, guns have played an equivocal role, sometimes for good, sometimes not.

There is no constitutional amendment about plows.

There is no biblical passage about guns.

There is, as is often pointed out, a very famous biblical verse about plows. And about pruning hooks. And about their value relative to swords and spears.

Isaiah seems certain that plows and pruning hooks are good. He seems less enthusiastic about the downside of swords, spears and, presumably, guns.

Nothing absolute or definitive, no unconditional endorsement of pacifism or non-violence, unless maybe you are someone who takes the Bible seriously or even literally. Just a little something to think about.

They will beat their swords into plowshares
and their spears into pruning hooks.
Nation will not take up sword against nation,
nor will they train for war anymore.
Isaiah 2:4

In Robert Wise’s classic sci-fi movie The Day The Earth Stood Still, Klaatu (Michael Rennie), a visitor from distant space, has come to earth to warn world leaders that their conflicts endanger universal order and must end. To enlist the help of the smartest scientist, Dr. Barnhardt (a fictionalized Albert Einstein played by Sam Jaffe), Klaatu visits the professor’s house. He finds an unsolved problem in celestial mechanics on the blackboard, and quickly corrects the equations. He is interrupted by the housekeeper Hilda:

HILDA
How dare you write on that blackboard! Do you realize the Professor has been working on that problem for weeks?

KLAATU
He’ll catch on to it in no time now.

HILDA
How did you get in here? And what do you want?

HILDA
Well, he’s not here. And he won’t be back till this evening.
(Klaatu scribbles a note and hands it to Hilda.)

KLAATU
You might keep this. I think the professor will want to get in touch with me.

Hilda’s glance wanders to the blackboard and she picks up an eraser, debating whether to erase Klaatu’s corrections.

KLAATU
I wouldn’t erase that. The Professor needs it very badly.

Even if you are not a physicist, and are simply intrigued by the arcana that only geniuses and space aliens understand, this is a memorable moment.

People who are comfortable living in the old high school classroom picture of a determinate universe full of atoms and their constituent protons, neutrons and electrons have another think coming. In the quantum world beyond simple particles, anything is possible and nothing is certain, if certainty itself exists. In the view of some, in quantum physics are hints of rough sketches of the face of God, as well solutions to practical matters such as how to teleport information across the universe beyond light speed. Those of us of lesser minds struggle to grasp even the most basic concepts, while the greater minds solve puzzles beautiful in their incomprehensibility.

Spanish artist Alejandro Guijarro has combined two things at polar ends of research and education. On one end he has taken detailed photos of blackboards, a thinking and teaching tool so primitive that some are surprised to find them still around, and others have never seen one. On the far end, these particular blackboards belong to some of the world’s leading quantum thinkers. Guijarro traveled to institutes and laboratories around the world to record the smudged, chalk-streaked evidence of some of the world’s most sublime calculations…and erasures. 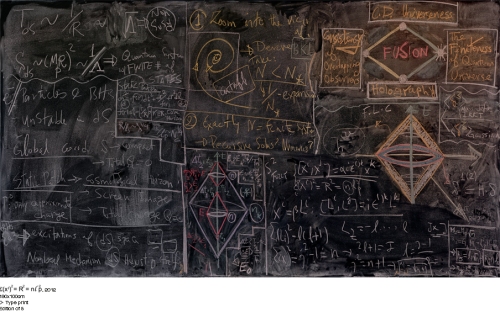