Wherever Your Treasure Is

For wherever your treasure is, there will your heart be too.
Matthew 6:21

Revelation of the Magi

An excerpt from the story of the magi as told by the magi:

And (something) like the hand of a small person drew near in our eyes from the pillar and the star, at which we could not look, and it comforted us. And we saw the star enter the Cave of Treasures of Hidden Mysteries, and the cave shone beyond measure. And a humble and kind voice made itself heard by us, which called out and said to us: “Enter inside without doubt, in love, and see a great and amazing vision.” And we were encouraged and comforted by the message of the voice. And we entered, being afraid, and we bowed our knees at the mouth of the cave because of the very abundance of the light. And when we rose at its command, we lifted our eyes and saw that light, which is unspeakable by the mouth of human beings.

And when it had concentrated itself, it appeared to us in the bodily form of a small and humble human, and he said to us: “Peace to you, sons of my hidden mysteries.” And again, we were astonished by the vision, and he said to us: “Do not doubt the vision that you have seen, that there has appeared to you that ineffable light of the voice of the hidden Father of heavenly majesty.”

Revelation of the Magi is written as a first-person account of the visit of the Wise Men, though that is unlikely. The available text is written in Syriac, with the story originating possibly as early as the 3rd century. Long forgotten, an English translation of it can now be found in Revelation of the Magi: The Lost Tale of the Wise Men’s Journey to Bethlehem (2010) by Brent Landau.

Only Candles Only Stars

Only Candles Only Stars

All of the lights
On the candles, trees, houses
Beneficial artifice
The best we can do.
Even the stars
Awakening guiding
Are incomplete.

The light that eludes
In the dark cold of winter
Hiding in plain sight.

“On a winter’s day, I went to the bath with the master. It was so cold that icicles hung from the roofs. We entered and as soon as he did the Unification, the bath grew warm. He stood in the water for a very long time, until the candle began to drip and gutter. ‘Rabbi,’ I said, ‘the candle is guttering and going out.’

‘Fool,’ he answered, ‘take an icicle from the roof and light it! He who spoke to the oil and it leaped into flame, will speak to this too, and it will kindle.’ The icicle burned brightly for a good while, until I went home, and when I got home there was a little water in my hand.”

Martin Buber,  Tales of the Hasidim

“People ask, ‘What is the Buddha?’ An icicle forming in fire.”

To the uninitiate
The stars are arrayed
Points of white
That delight
But mean nothing.
The constellator sees old pictures.
The artist connects them anew.
The astronomer investigates
Each by each.
On cold nights
Of black sky
I see connect investigate
Unsure which I am
While the stars
Patiently wait.

Simplenote is free and simple. Nothing fancy, not multi-function. It just lets you make text notes and sync them across devices. It is available for Android, iOS, Windows, Mac, Linux and the web.

Simplenote was bought a few years ago by Automattic, the folks who give you WordPress, the platform for this and multi-millions of blogs.

Simplenote is my most used and valuable app. Some notes are just one sentence or a link. Some notes are longer, the length of an essay, a poem or a blog post. In fact, the majority of my blog posts start out as Simplenote notes. Like this one did.

I love gadgets, especially great cheap gadgets. I don’t usually (ever?) recommend them in this blog. But since I am now inundated with holiday promotions for way overpriced wireless earphones and headphones, I feel compelled to suggest this alternative.

I waited a long time to buy wireless earphones. It is a great idea, but they were too expensive. My ears are good, but not nearly smart enough to pay a premium for the incremental sound differences they promised.

Then a few months ago I looked harder. What I found seemed too good to be true. Wireless earphones that, according to customer reviews, worked well. And cost about $20!

After months of using the SoundPEATS QY7 Wireless Bluetooth Earphones every day, I can say that they do work well. And they still cost about $20. And they come in a bunch of colors (I always go for plain black). And they have over 14,000 customer reviews on Amazon—half of them five stars.

So there you go. Buy one for yourself. Buy them for friends and loved ones. If you’re thinking about those higher-priced ones (some for $200 or more), feel free. Of course, for $200 you could buy TEN of these.

Obama: The Superstar of the Troubled Democratic Show Is Leaving

Did you ever watch a TV show that was only just okay, but you kept watching week after week because you really liked the star—someone so special that he made even the worst episodes watchable and enjoyable?

Then that superstar left the show. Contract differences. Elections. Whatever. And then the show was over. Canceled.

Barack Obama has left the Democratic show. In the month since the election, we have gotten a preview of what it will be like without him. The Democrats thought, as producers do, that they were really the show, and not some guy that they had helped turn into the superstar he became.

Producers quickly learn that you can’t force people to watch your show. You can’t expect people to watch your show just because you tell them how great and important it is, and how terrible the other networks and shows are. While it’s an advantage to have a superstar, it’s better still to write good scripts, employ creative directors, and cast good people in interesting roles. Better to give people what they want and what they need. As viewers or as citizens and voters.

I just checked to see how many posts I’ve published about or mentioning Syria. Twenty in the last four years.

Just when you think it couldn’t get worse, it does. When you think that nobody has “the answer” you are proven right. Again.

The oldest of the posts is Can Israel Stop the Syrian Genocide? (“Can Israel stop the Syrian genocide? On its face, the question seems practically preposterous and crazy….But in a world and region that continues to exhibit madness, maybe moments of crazy wisdom are what we need to break through. Because whatever we are doing isn’t working.”)

So we watch. It’s not the first time in our lifetimes, or in history, that good people have stood by uncertainly at the sight of spiraling tragedy and could not act or figure out what to do.

William Butler Yeats wrote The Second Coming in 1919, as the madness of World War I was just ended and the madness of the Irish War of Independence was just beginning. “Things fall apart; the centre cannot hold.” As Yeats saw it, one cycle was ending in utter darkness, but there was the possibility of light appearing again in history, as it had before.

This is a season of light for many people, but in Syria it is getting darker every day. We will do what we can, but if we and our leaders can do nothing, we can at least keep Syria in our hearts, right next to a burning light.

Turning and turning in the widening gyre
The falcon cannot hear the falconer;
Things fall apart; the centre cannot hold;
Mere anarchy is loosed upon the world,
The blood-dimmed tide is loosed, and everywhere
The ceremony of innocence is drowned;
The best lack all conviction, while the worst
Are full of passionate intensity.

Surely some revelation is at hand;
Surely the Second Coming is at hand.
The Second Coming! Hardly are those words out
When a vast image out of Spiritus Mundi
Troubles my sight: somewhere in sands of the desert
A shape with lion body and the head of a man,
A gaze blank and pitiless as the sun,
Is moving its slow thighs, while all about it
Reel shadows of the indignant desert birds.
The darkness drops again; but now I know
That twenty centuries of stony sleep
Were vexed to nightmare by a rocking cradle,
And what rough beast, its hour come round at last,
Slouches towards Bethlehem to be born?

And so, as long as we recognize that the real President and his real administration have very real intentions and powers, we might gain perspective from treating them graphically as comic book characters. In any case, we are probably already tired of seeing photos of Donald Trump. Maybe this is a way to make the view a little bit different and more interesting.

The news is that Rick Perry will be nominated as Energy Secretary, head of a department he had trouble remembering he wanted to eliminate. So here he is: 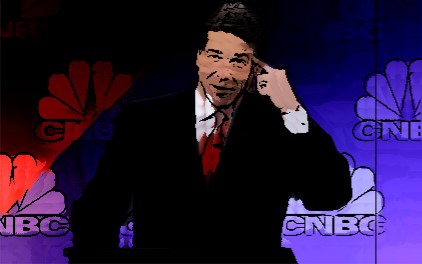