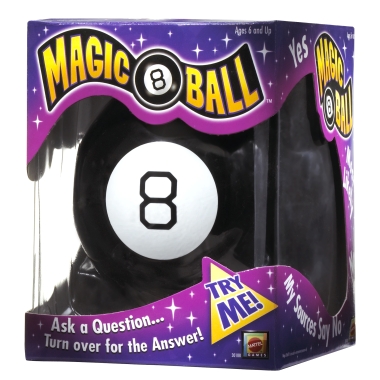 Trump said that on his first day in office, he would authorize law enforcement to actively deport “bad dudes,” such as those who have committed crimes, which he said numbered “probably millions.” But he declined to flatly say whether he would round up other undocumented immigrants, stressing that once the initial deportations occur, “then we can talk.”

“There is a very good chance the answer could be yes,” Trump said when asked if he would deport those who have lived here peacefully but without papers. “We’re going to see what happens.”

What about “bad dudettes”? Will he deport them?

Trump’s statement, “There is a very good chance the answer could be yes” sounds exactly like something from a Magic 8 Ball.

For comparison, here are the five neutral/equivocal answers you would get from a Magic 8 Ball (or Trump):

Better not tell you now