Trump just retweeted this image. Once again: Are we scared yet? Yet? If not now, when? And are we helpless to stop it? 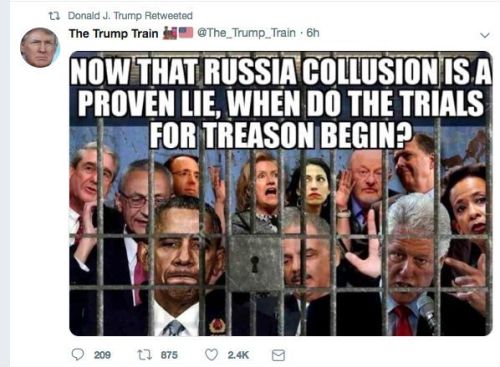 The first time I posted the question “Are we scared yet?” was on January 31, 2017, just a few weeks after Trump took office. I’ve asked it regularly since, most recently in June 2018, when CBS News was interviewing an ICE whistleblower at home, and government agents came knocking at the door in the middle of the interview. In truth, that question could be asked just about every day.

I try not to be unnecessarily negative, I am a reasonable person, and I am not paranoid. But I try to be realistic, I am a student of history, and I believe in America and in the rule of law.

This is heading to a confrontation that we might find in history books or elsewhere in the world, but have never seen in America. As much faith as we have in our institutions, they have never been tested like this, and we haven’t seen the worst yet. Will we pass the test? We hope so. Should we be scared yet? Are we?