Ben Franklin: My University of Pennsylvania Should Revoke Trump’s Diploma 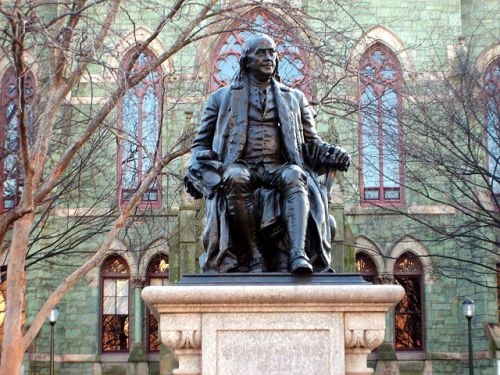 “By the way this idiot Woodward who wrote this book which is all fiction said that I said something like that, but he put it in a crude manner…The concept is true, but the way it was said was very…hey, I went, like, to the best college.”
Trump at a North Dakota rally

Trump self-importantly crows about his degree from Wharton (like all the time), the business school of the University of Pennsylvania in Philadelphia. Trump’s point is that he must be, like, a genius with that Penn degree. Penn, is, like, a very good school that continues to provide its students with an excellent education. Though in some small number of high-profile cases, it appears to be casting pearls before swine.

The bigger point is Ben Franklin, credited as founder of the university. Above is a photo of the Ben Franklin statue at the center of campus, in front of College Hall.

Ben Franklin is having none of it. Among our American founders, he is the most famous for not suffering fools. That’s why he is asking the University of Pennsylvania—his University of Pennsylvania—to revoke Trump’s diploma. That won’t stop Trump from continuing to say he went, like, to the best college, but it will give the best college a way to say: thanks for the compliment and PR, but no thanks. And it will give Ben Franklin a way to stop spinning in his grave, just a few blocks from Independence Hall. Because this is not what he envisioned for the first-ever Penn grad in the White House. Not, like, at all.