Veterans Studies as an Academic Discipline 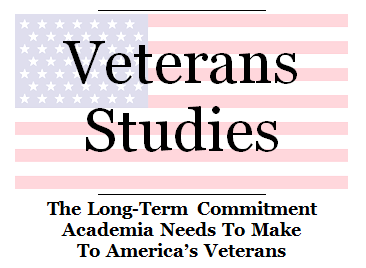 This began with a simple thought: The use of veterans as a political prop is about as immoral as the failure as a nation to fully and properly honor their service beyond politically expedient lip-service.

I wondered just how seriously we take veterans, and whether they have yet received the same sort of academic attention that practically every other cultural and social cohort has. The answer is that it is just starting, and that is a good thing.

My goal is to inform people of the importance and feasibility of establishing “Veterans Studies” as an academic discipline. Below you will hear my story, as well as those of students I’ve taught in Eastern Kentucky University’s Veterans Studies Program. I was a student veteran when I approached faculty and administrators with the idea. And it will take that kind of grass roots activism to get Veterans Studies established as a discipline at institutions across the country….

Why do we need Veterans Studies programs? Well, in 1947, veterans comprised up to 49% of all college students. Professors from that era will tell you stories of makeshift camps and barracks built to accommodate them. In the wake of WW2, the option to pursue higher education helped America avoid a catastrophic influx of unemployed veterans into the job market. School became synonymous with service. However, a rift formed between the military and academia when the anti-war movement found a home on college campuses during the Vietnam War. While veterans have come a long way since then, those returning home from Iraq and Afghanistan still deal with many of the same stereotypes….

The first Women’s Studies program was founded in 1970 at San Diego State. This program sought to undo the stereotypes that held back the advancement of women in society for centuries. Today, there are more than 900 Women’s and Gender Studies programs throughout the world. Likewise, the first program to examine the culture of African Americans originated at San Francisco State in 1968. Today, there are more than 300 programs. Similar stories can be found about programs ranging from Appalachian Studies, to Irish Studies, to Jewish Studies, to programs for about every underrepresented, misunderstood population on the globe. Why are veterans excluded from these initiatives?

This problem is one driven by too much lip-service and not enough action. In 2011, $9.9 billion had already been spent on tuition assistance. Student veterans are big business. While this money is certainly a welcome relief for those institutions of higher learning struggling with low enrollments and government budget cuts, those benefiting do not seem concerned with investing it in long-term initiatives designed to transform the societies in which their veteran graduates live and work….

Veterans Studies is not just about teaching veterans. It is about bringing non-veterans and veterans together at a common center rooted in scholarship. Non-veteran students take my courses to complete “diversity of experience” credits and, if they choose, go on to earn a minor or certificate in a field that prepares them for work within military and veteran communities….

That both veterans and non-veterans take the course is vital. The two groups learn to communicate by framing veteran experience in three key ways: the institutional, cultural, and relational dimensions of Veterans Studies. The institutional portion of the course teaches the students how the different branches function as a hierarchy and together—in the past as well as the present—to keep America safe. The cultural dimension exposes them to works of literature, films, and the typical ways in which veterans are depicted by the media. Finally, in the last portion of the course, students learn about how veterans assimilate into society after taking off the uniform….

Veterans Studies, as it exists in the courses I’ve designed, integrates oral, written, and visual communications skills in projects requiring critical inquiry and research. Students, taking Veterans Studies courses for a variety of professional and personal reasons, must cross disciplinary lines in order to make the first forays into this field. Further, group work, specifically, the kind of group work that asks veteran and non-veteran students to collaborate and produce work relevant to all parties, is foundational in both composition and the future of Veterans Studies….

Schools benefiting financially from the sacrifices of service men and women have a responsibility to create veteran-friendly environments and produce graduates capable of interacting respectfully and knowledgeable about veterans issues in the workplace and their day-to-day lives. The time has come for Veterans Studies Programs to claim their rightful places within the walls of academia.