Emma Goldman’s dislike of religion is evidenced by her participation in events such as this [Yom Kippur Picnic], scheduled on Jewish holy days.
Jewish Women’s Archive

We were invited to a picnic this Saturday. We declined. Because it is Yom Kippur, a fast day and the holiest day on the Jewish calendar.

Curiosity led to discovering that there were once not only Yom Kippur Picnics but Yom Kippur Balls.

When Jews decide to chow down on Yom Kippur, it’s usually done clandestinely, sneaking tasty morsels in a dark pantry, or disappearing into a diner in some nearby non-Jewish neighborhood. But furtive noshing wasn’t always the heretical path of choice on the Day of Atonement. Just over a century ago, a range of leftists held massive public festivals of eating, dancing, and performance for the full 25 hours of Yom Kippur, not only as a way to fight for the their right to party, but to unshackle themselves from the oppressive religious dictates they grew up with. What does one do, after all, when prayers and traditional customs no longer hold any meaning yet you still want to be part of a Jewish community? Eating with intention on a fast day allows you, in one fell swoop, to thumb your nose at the religious establishment and create a secular Jewish identity.

These Yom Kippur Balls, organized initially by anarchists in the mid-1880s, started in London and migrated to New York and Montreal. Smaller nosh fests and public demonstrations were also celebrated by Jewish antinomians in other locales. Unorthodox Jews in interwar Poland could pull hundreds of locals into small venues on Yom Kippur in shtetls like Kalish and Chelm; in larger cities like Warsaw and Lodz, they could sell out 5,000-seat circuses. Heresy was big business; tickets for early 1890s Yom Kippur events cost 15 cents for anarchists: capitalists who deigned to attend paid double.

There’s no suggestions here about what Jews of any religious or political stripe should do about fasting or partying on Yom Kippur. As with all such things, there is what your society or community expects you to do, what your God demands that you do, and what your heart and mind tell you to do. If there is a paradise, Emma Goldman is probably there, still railing against injustice, still noshing on Yom Kippur. 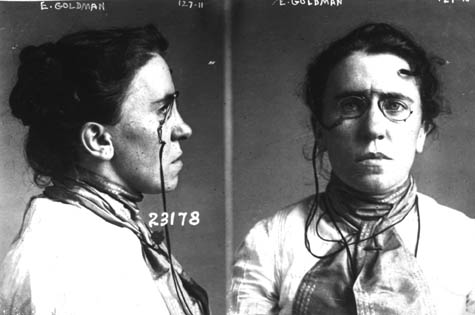