After 70 Years of Progress, America Must Face Itself Again 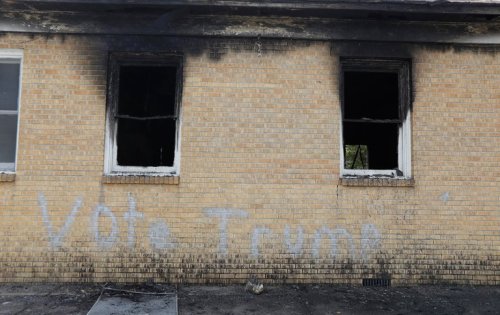 Black Church Burned, With ‘Vote Trump’ Scrawled on Side

In 1945 America helped defeat Nazi Germany, a global force that threatened to engulf the world in virulent hate and tyranny. In the aftermath of a brutal but noble victory, and despite deserved self-congratulation, America was forced to look at itself. It was not immune to or unfamiliar with similar levels and types of hate within—in certain places, among certain people.

We worked at identifying and eliminating that sort of hate, institutionally and individually, to the extent that is ever possible. There were missteps and resistance, along with denials and rationalizations. Progress was made, sometimes in fits and starts, and the work goes on.

This has been a year of staggering, stupefying realizations. Among the things we know better, as if we weren’t aware, is that there are plenty of people with hate in their hearts who for a long while have felt marginalized and silenced by a degree of public decency. Another thing we learned, and should know, is that once public decency is called into question or invalidated, those same people will be encouraged and emboldened.

I wrote about this eight months ago, in a post Unleashing the Dogs of Hate. If you haven’t noticed, that hate is barking louder and starting to bite.

Like it or not, these are our countrymen. Pretending they are not has never worked, nor has giving up because there’s nothing to be done. Progress has been made, and though it would be comfortable to believe things inevitably move forward, they don’t. Backwards happens, but not if we start by facing up again to who we are and hope to be. And then get back to work.