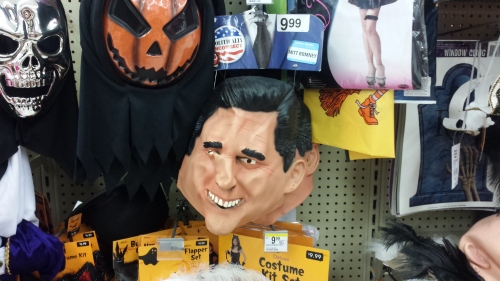 When there’s not a big election with big characters, Halloween masks are not overwhelmingly political. Walking the Walgreens aisles a few days before the holiday, I saw only one official or candidate hanging from a hook: Mitt Romney at the bargain price of $9.99 (see above).

Best guess is that after 2012 there was a surplus of these, and with no big interest in anybody anyway right now, 2014 seemed like as good a time as any to dump them. Or maybe Walgreens is more politically savvy than most, and just wants to get on the latest Romney bandwagon first. Of course the mask doesn’t much look like Romney or anybody else in particular (maybe a bit like Prince Charles), so you could just wear it as a generic face, and when asked, take your pick.

As for Mitt Romney being  surrouneded on the shelf by scary skulls, sexy kittens, the Phantom of the Opera, etc., he does look out of place. But when Halloween 2016 rolls around, who knows?