Iraq and Afghanistan Veterans of America (IAVA) this week launched a new campaign asking all Americans to “Go Silent” this Memorial Day in honor of all those who have made the ultimate sacrifice. The “Go Silent” campaign encourages Americans to pledge at IAVA.org to pause and be silent for a full minute at 12:01 p.m. EDT on Memorial Day, Monday, May 27.

The Pew Research Center has reported extensively on the Military-Civilian Gap:

America’s post-9/11 wars mark the longest period of sustained combat in the nation’s history – and never before has America waged war with so small a share of its population carrying the fight. 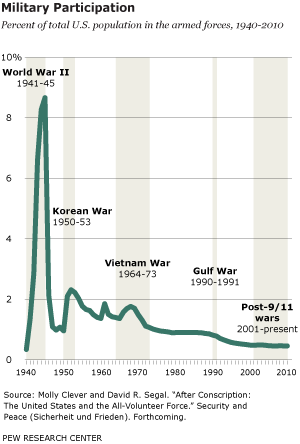 For more about IAVA.

To donate to IAVA.