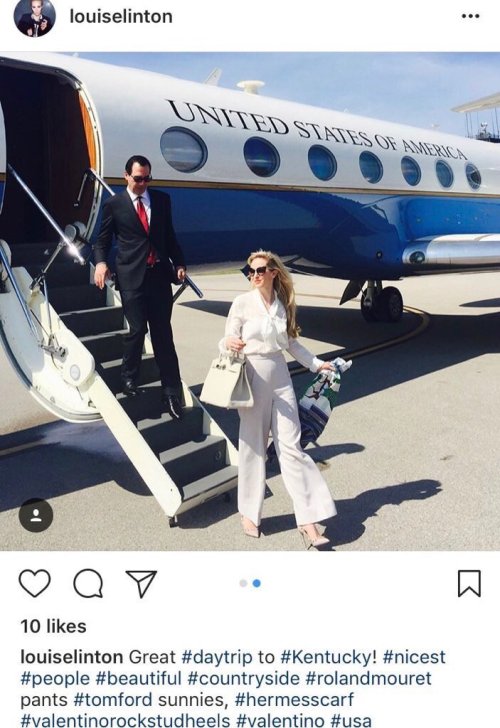 If you don’t follow the horror film franchise that is the Trump administration (and why should you?), this morning’s story is about Louise Linton, the wife of Treasury Secretary Steve Mnuchin:

WASHINGTON — The wife of the Treasury secretary on Monday night took a page from President Trump’s social media playbook for punching down.

Louise Linton, the labels-loving wife of Steven Mnuchin, replied condescendingly to an Instagram poster about her lifestyle and belittled the woman, Jenni Miller, a mother of three from Portland, Ore., for having less money than she does.

The brouhaha began when Ms. Linton posted a photograph of herself disembarking a military jet emblazoned with official government markings. She had joined her husband on a quick trip to Kentucky with the Senate majority leader, Mitch McConnell.

“Great #daytrip to #Kentucky!” Ms. Linton, 36, wrote under the photograph. She then added hashtags for various pieces of her expensive wardrobe, listing #rolandmouret, #hermesscarf, #tomford and #valentino.

Ms. Miller, 45, wrote under the photograph, “Glad we could pay for your little getaway. #deplorable.”

Instead of ignoring Ms. Miller, Ms. Linton — whose account had been public — replied with snark. (Ms. Linton changed her Instagram account to a private setting soon after the photograph was posted.)

“Aw!!! Did you think this was a personal trip?! Adorable!” she wrote. “Do you think the US govt paid for our honeymoon or personal travel?! Lololol. Have you given more to the economy than me and my husband? Either as an individual earner in taxes OR in self sacrifice to your country?”

Ms. Linton went on: “I’m pretty sure we paid more taxes toward our day ‘trip’ than you did. Pretty sure the amount we sacrifice per year is a lot more than you’d be willing to sacrifice if the choice was yours.” After that, she included emojis of a curled bicep and a face blowing a kiss.

“You’re adorably out of touch,” she said, later adding, “your life looks cute” before concluding, “Go chill out and watch the new game of thrones. It’s fab!”

Mr. Mnuchin is a wealthy businessman and a former executive at Goldman Sachs who worked on deals with Mr. Trump before Mr. Trump became president. Ms. Linton is an actress who posed with the diamonds she wore at their June wedding for a Town and Country magazine spread.

Here’s Ms. Linton/Mrs. Mnuchin talking about all the jewels she wore at their June wedding:

The engagement ring: “We were at Art Basel in Miami a few years ago and we walked past a jewelry store. We stopped to admire the shape of an oval engagement ring in the window. It’s quite an old-fashioned shape but I love it. Three years later he proposed to me with an oval ring just like the one we saw in the window.”

On her pearl drop earrings: “I love how easy pearls are to wear with anything and everything. Pearls are elegant and demure. They remind me of the femininity and grace of the ’40s and ’50s. They make me think of Grace Kelly and Tippi Hedren in Hitchcock’s Dial M for Murder and The Birds. Those women were so chic.”

On her diamond necklace: “The stones are brilliant cut which makes them sparkle at night. It fills me with awe to consider that before they were found, these diamonds had been sitting undisturbed beneath us for hundreds of millions of years over 100 kilometers deep in the earth’s mantle.”

On this pair of earrings, converted to a ring: “A friend gave me these pave earrings for my law school graduation. When I put them on I felt very serious. I got creative and took them to a local jeweler to turn them into a cocktail ring. He just cut off the posts and soldered them onto a band! They sit diagonal to each other on your finger which is unexpected and kind of cool. It’s great to be able to make something new you love out of something old.”

(Note: With all due respect, it appears she attended an unaccredited law school in L.A., which may explain why it took earrings to make her feel “very serious.”)

On her cluster earrings: “These date back to the 1920s. They’re starburst and reminiscent of Old Hollywood glamour. I love to think about who wore them over the generations… I can imagine them on Eva Marie Saint, or Ava Gardner, or Lauren Bacall. Where did they go from there? What did they signify to the women who wore them before me? Who will own them in the future? You never really own a diamond. You just get to keep it for a while before it begins a new journey with someone else.”

On her diamond eternity band: “I love the emotional symbolism of the eternity band as a wedding band. It’s like wearing the infinity sign on your finger and represents the cyclical and enduring aspect of love.”

On her asscher cut stud earrings: “These small Asscher cut studs were a Valentine’s gift a few years ago. We took our dogs to a little ranch hotel in California for the weekend. The earrings always remind me of that trip.”

On her diamond necklace: “This necklace looks like a large diamond pendant but if you look closely it’s made of lots of little stones in differing shapes. My character in Serial Daters Anonymous [2018] wears it through most of the film!”

On her pearl earrings: “I bought these freshwater pearls from the gift shop at the Kennedy Center when I went to see the ballet curated by dancer Misty Copeland in April. I arrived early and was browsing the gift shop where a local artisan was selling her handmade jewelry. They’re so natural, simple and pretty.”

On her “ten to ten” engraved necklace: “As a child, my mother and I always used to look at the clock at ten to 10. We’d find one another and say, ‘It’s ten to ten!’ and it became our little thing. She died when I was 14, but I always remembered that tradition. One of my friends gave me this silver necklace engraved with this as a simple reminder of my mom. I feel very close to her when I wear it.”

The Trump administration specializes in remarkably uncool people, starting with Trump himself. It just happened that my music this morning veered towards one of the coolest people, with a track that seems perfectly appropriate.