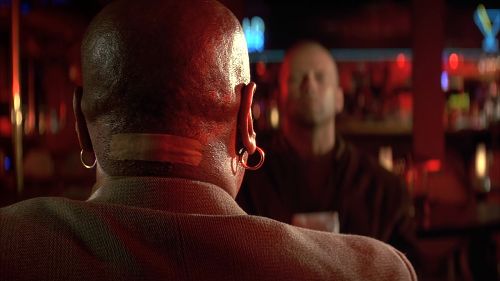 Now the night of the election, you may fell a slight sting, that’s conscience messin’ wit ya. Screw conscience! Conscience only hurts, it never helps.
Loosely adapted from Pulp Fiction

Political pragmatism is a messy business, especially when it looks like pure expediency. That goes for candidates who are not trusted or liked, and for supporters and enablers who overlook obvious shortcomings and transgressions for the sake of some higher goal. (For Democrats and Republicans who think this is only about the other, think again.)

The best movie moment about expediency comes from Pulp Fiction. Those who know this great movie may know the scene. Those who haven’t seen it should, for entertainment and for Tarantino’s willingness to take on interesting moral and ethical questions. Be advised that the movie is rough, as is the language in this scene.

I think you’re gonna find ­ when all this shit is over and done ­ I think you’re gonna find yourself one smilin’ motherfucker. Thing is Butch, right now you got ability. But painful as it may be, ability don’t last. Now that’s a hard motherfuckin’ fact of life, but it’s a fact of life your ass is gonna hafta git realistic about. This business is filled to the brim with unrealistic motherfuckers who thought their ass aged like wine. Besides, even if you went all the way, what would you be? Feather-weight champion of the world. Who gives a shit? I doubt you can even get a credit card based on that.

Now the night of the fight, you may fell a slight sting, that’s pride fuckin’ wit ya. Fuck pride! Pride only hurts, it never helps. Fight through that shit. ‘Cause a year from now, when you’re kickin’ it in the Caribbean you’re gonna say, “Marsellus Wallace was right.”