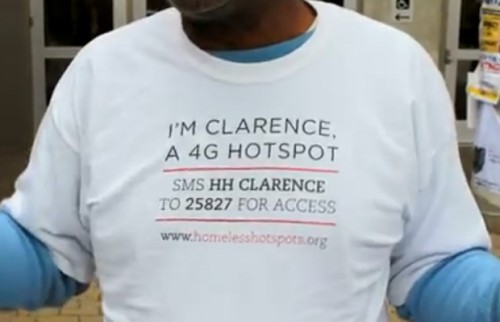 The marketing program that turned homeless people into walking WiFi hotspots at the SXSW Interactive conference in Austin has gotten plenty of criticism and ridicule. But above all that, it seems to be one more example of epidemic tone deafness in marketing, entertainment, politics, and everywhere that people don’t seem to be listening to what they are saying and doing.

BBH Labs of New York came up with the concept. They posted:

This year in Austin, as you wander between locations murmuring to your coworker about how your connection sucks and you can’t download/stream/tweet/instagram/check-in, you’ll notice strategically positioned individuals wearing `Homeless Hotspot’ T-shirts. These are homeless individuals in the Case Management program at Front Steps Shelter. They’re carrying MiFi devices. Introduce yourself, then log on to their 4G network via your phone or tablet for a quick high-quality connection…You pay what you want (ideally via the PayPal link on the site so we can track finances), and whatever you give goes directly to the person that just sold you access. We’re believers that providing a digital service will earn these individuals more money than a print commodity.

The “print commodity” that inspired the program was the classic model of homeless people selling newspapers (remember them?) on the streets. Since coworkers are no longer wandering around murmuring about how it sucks that you can’t find a newspaper, this seemed to someone like a rational, even brilliant, marketing analog and social experiment. The critics have been quick to point out that treating people like digital transmitters might be a little depersonalizing, even if you tipped them. Expect to see this one satirized mercilessly and immediately.

You can’t catch all controversial ideas before they go live. It’s a fine line between “what were they thinking” and groundbreaking, just as, in the words of Nigel Tufnel, “It’s such a fine line between stupid and clever.” What can help, simple as it sounds, is taking time, listening to what you’re saying and doing, and exercising some discernment and discretion. All that is in shorter supply, given the pace of messaging and the opportunity to communicate infinitely and instantly. But a little less deafness, a little more time listening, is a way to avoid “it sounded like such a good idea at the time.”

Can Israel Stop the Syrian Genocide?

Can Israel stop the Syrian genocide? On its face, the question seems practically preposterous and crazy. But at its heart, the question has a right resonance.

Argue about conflict and aggression, current and historic, argue about religion, argue about appropriation, argue about morals and equities, but Israel remains the standard bearer and source of a tradition of forceful global compassion. On top of that, the existence of modern Israel is grounded in the repudiation of one of history’s most notorious genocides—it was the Holocaust that in part gave rise to the term itself.

Is there any practical expression of this, at this moment, in that neighborhood, that makes any sense or would not worsen rather than better situations? Almost certainly not. But in a world and region that continues to exhibit madness, maybe moments of crazy wisdom are what we need to break through. Because whatever we are doing isn’t working.