Baby Jesus Is Worshiped by Dragons and Other Wild Beasts 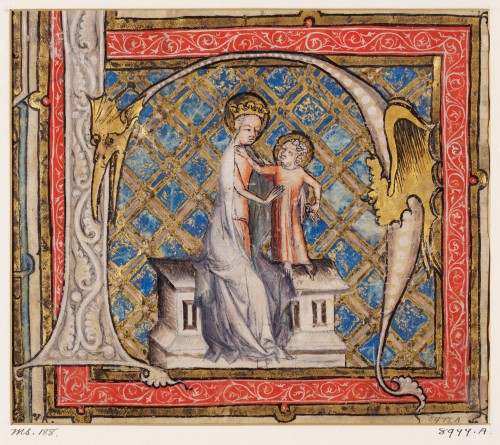 From The Gospel of Pseudo-Matthew
The Other Gospels: Accounts of Jesus from Outside the New Testament
Edited and Translated by Bart D. Ehrman and Zlatko Pleše

17
The Wrath of Herod and the Flight to Egypt

1 When King Herod saw that he had been deceived by the magi, his heart was inflamed and he sent his soldiers out on every path, wishing to capture them. When he was not able to find a trace of them, he sent soldiers to Bethlehem and killed every infant from two years and under, according to the time that he had solicited from the magi.

2 One day before Herod had done this, Joseph was warned by an angel of the Lord, “Take Mary and the child and go, take the desert route to Egypt.”

18
Baby Jesus Is Worshiped by Dragons and Other Wild Beasts

1 When they arrived at a certain cave where they wanted to cool themselves off, Mary came off the donkey and sat down, and held Jesus on her lap. There were three male servants with them on the road, and one female servant with Mary. And behold, suddenly many dragons came out of the cave. When the servants saw them they cried out. Then the Lord, even though he was not yet two years old, roused himself, got to his feet, and stood in front of them. And the dragons worshiped him. When they finished worshiping him, they went away. Then was fulfilled what was spoken by the prophet in the Psalms, who said, “Praise the Lord from the earth, O dragons and all the places of the abyss.”

2 The Lord Jesus Christ, though just a small child, walked along with them so that he might not be a burden to anyone. Mary and Joseph were saying to one another, “It would be better for those dragons to kill us than to harm the child.” Jesus said to them, “Do not think of me as a young child, for I have always been the perfect man, and am now; and it is necessary for me to tame every kind of wild beast.”

1 So too both lions and leopards were worshiping him and accompanying him in the desert, wherever Mary went with Joseph. They went before them showing them the way and being subject to them; and bowing their heads with great reverence they showed their servitude by wagging their tails. But on the first day that Mary saw lions, leopards, and various other wild beasts surrounding them, she was terrified. The young child Jesus smiled in her face and spoke to her with a consoling word, saying, “Do not fear, Mother, for they are hastening along, not to hurt you but to serve you.” With these words he removed the fear from their hearts.

2 And so lions, asses, oxen, and beasts of burden carrying their baggage were all walking together with them, and whenever they made a stop, they would graze. There were also tame goats who came out with them and followed them from Judah; these were walking among the wolves with no fear. One was not afraid of another, and none of them was harmed by another in any way. Then was fulfilled what Isaiah said, “Wolves will pasture with sheep and the lion and ox will eat straw together.” There were two oxen used as pack animals with them on the way; lions guided them on the way of our Lord Jesus Christ, whose baggage they were carrying.

Notes from The Other Gospels: Accounts of Jesus from Outside the New Testament:

The book is a Latin reworking of the (Greek) Proto-Gospel of James, based probably on one or more Latin editions of that work that have long since been lost. There are numerous differences from the Proto-Gospel, in both contents and emphases….Pseudo-Matthew tells of the holy family’s flight to Egypt, during which the infant Jesus performs numerous miracles—taming dragons, lions, and leopards; making a palm tree bend down to deliver its fruit to a famished Mary; causing idols in an Egyptian pagan temple to bow down in worship before him. These were some of the most familiar stories of the Christ child throughout the Middle Ages….

There continue to be debates concerning when the Gospel itself was composed….Pseudo-Matthew must obviously date to some time in the mid-seventh century, at the earliest.

In the most thorough analysis to date, Gijsel has maintained that even though direct literary dependence on the Rule of Benedict cannot be demonstrated, there are enough general similarities to suggest that the book was written when monastic orders were beginning to expand in the West, by someone invested in them. Largely on these grounds he makes a convincing argument that the text was produced in the first quarter of the seventh century, by a monk in the Latin-speaking West who was enchanted by the account of the Proto-Gospel and its potential for conveying homage to Mary as a model virgin embracing the monastic ideal.

Not only was Pseudo-Matthew itself popular in such circles for nearly a millenium, its message was spread even further abroad as its reworked stories were themselves edited for incorporation in the eleventh-century book, Libellus de nativitate sanctae Mariae (“Book on the Birth of Saint Mary”) and by Jacob of Voragine in The Golden Legend (written 1260 CE), which was the most widely read and influential book of the late middle ages, down to the Reformation.