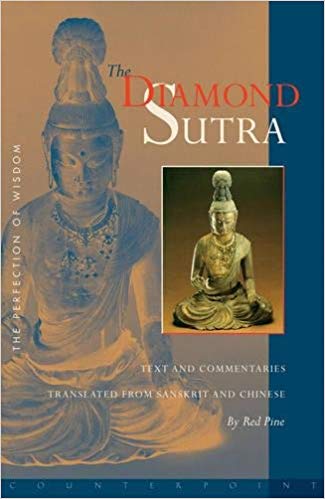 Gatha: A metrical unit of Indian verse that can be anywhere from two to six lines in length. It is sometimes used as a stand-alone poem and sometimes to restate preceding sections of prose.

From The Diamond Sutra, Chapter Thirty-two, translation and commentaries by Red Pine:

”Furthermore, Subhuti, if a fearless bodhisattva filled measureless, infinite worlds with the seven jewels and gave them as an offering to the tathagatas, the arhans, the fully-enlightened ones, and a noble son or daughter grasped but a single four-line gatha of this teaching of the perfection of wisdom and memorized, discussed, recited, mastered, and explained it in detail to others, the body of merit produced as a result would be immeasurably, infinitely greater.”

The Buddha returns to the comparison he has made throughout this sutra, whereby an offering of the most valuable objects in the world is compared to an offering of a single poem that expresses the truth. As the extent and value of material offerings have steadily increased, the fearless bodhisattva has been presented as the most likely member of the Buddha’s audience to understand the greater value of a good poem. How ironic that at the end of this sutra, the merit of a fearless bodhisattva fails to compare to that of an ordinary person. For even a fearless bodhisattva can become attached to the net of jewels of an illusory world. But the message the Buddha wants to leave with his audience is that the body of merit synonymous with the Buddha’s own diamond body is accessible to anyone, that such a body is a four-line gatha away.