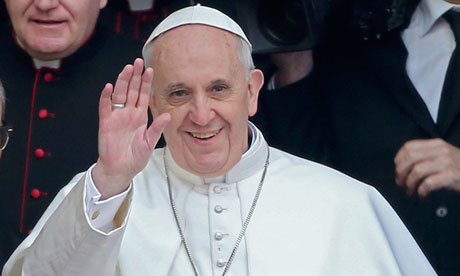 I am not a Catholic or a Christian, but no major world leader—religious or political—gives me more hope for the possibility of humanity than Pope Francis.

Today’s story as reported by Crux:

In his homily at morning Mass on Monday, Pope Francis returned to a familiar theme — how amassing wealth, both money and land, while children suffer and die, is a morally unacceptable form of idolatry. There’s an “idolatry that kills,” that makes “human sacrifices” Francis said, by those who are hungry of money, land and wealth, who have “a lot” in front of “hungry children who have no medicine, no education, who are abandoned.”

ROME – During his daily morning Mass on Monday, Pope Francis said there are those in the world who have too much wealth, and their hoarding of money and land in the face of hungry children with no access to medicine or education is the equivalent of making “human sacrifices.”

In times when the media reports “so many calamities, so many injustices,” especially concerning children, Francis sent a “strong” prayer to God, asking him to convert the hearts of men so that they don’t worship “the God of money.”

Francis’s homily, partially reported by Vatican Radio, turned on the Gospel of the day, a passage from the Book of Luke that tells the parable of the rich man for whom, according to the pope, money was his god. The passage, the pontiff said, leads to a reflection of how useless it is to rely on earthly property, emphasizing how much the true treasure is instead one’s relationship with God.

Despite the abundance of his harvest, the man in the parable wanted to expand his storehouses to have even more, in his “fantasy” of “stretching life out,” collecting more goods “to the point of nausea,” not knowing when it’s enough, in an “exasperated consumerism.”

This, Francis said, is the “reality of today,” when many people who live to worship money and make it their god, lead a senseless life.

There’s an “idolatry that kills,” that makes “human sacrifices” Francis said, by those who are hungry of money, land and wealth, who have “a lot” in front of “hungry children who have no medicine, no education, who are abandoned.

“This idolatry causes so many people to starve. We only think of one case: 200,000 Rohingya children in refugee camps,” the pope said, referring to the refugee crisis in Myanmar and Bangladesh. “There are 800,000 people there, 200,000 of whom are children.”

“Our prayer must be strong: Lord, please touch the hearts of these people who worship God, the god of money,” he said. “And also touch my heart, so I don’t fall into this too, so that I can see.”