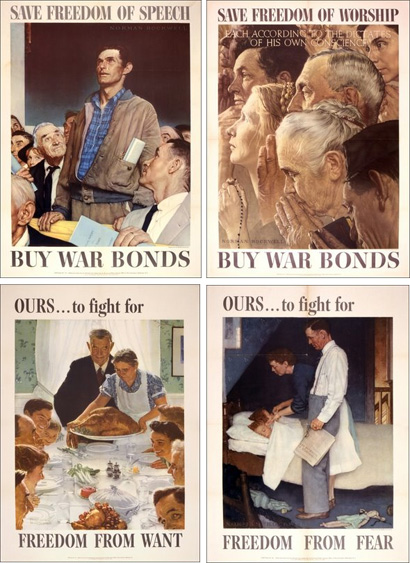 Passover is coming. The first seder meal will be held on the evening of Friday, April 22. Even for non-observant Jews, this holiday is frequently a time for participation. One estimate says that 80% of Jews attend some sort of seder.

This year I suggest we go way back for a Passover theme. Back to FDR’s Four Freedoms from 1941.

The overall order of the seder (“seder” actually means order) has been standardized for centuries—the blessings, the rituals, the symbolic food and drink, the songs, and most of all, the recitation of the events of the exodus from Egypt. But the text and the form and the meaning have been subject to remixing, some of it pretty adventurous.

In the modern era, the freedom embedded in Passover has been extended to all sorts of concerns. During the time of the civil rights movement, the obvious connection was made between ancient and modern oppression, and the struggle to end that oppression.

One of my earliest and warmest memories is that of my father reciting the Dayenu, the chant of rebellion, liberation, travail, and the creation of a new law that is the story of Passover. One of my latest and warmest memories is that of working with my wife and children to make of our own Passover Seder something that would speak to our deep concerns about our selves and our world.

Our efforts became sharper and more urgent in 1968, when the Passover came one bare week after the murder of Martin Luther King, the April uprising of black Washington against the blank-eyed pyramid-builders of our own time, and the military occupation of our city. Who in
those days could forget that the prophet King had remembered Moses?– had spoken of how he had been to the mountain-top, had seen the promised land, but might never enter. … And then we realized that in 1969, the third night of Passover, April 4, would be the first anniversary of King’s death.

Since then, Passover has become the platform for seders centered around all kinds of affliction, oppression, aspiration and freedom. Women. LGBT. Poverty. Peace. The Earth. And so on.

One example of this concerns a new tradition that is widely practiced. The seder plate contains a number of foods symbolizing the story of the Egyptian captivity and the fight for freedom. Susannah Heschel conceived of one more thing to add:

So how was it that the orange found its place on the seder plate as a Passover symbol of feminism and women’s rights?

Susannah Heschel, daughter of Abraham Joshua Heschel and a scholar in her own right, says that at the height of the Jewish feminist movement of the 1980s, she was inspired by the abundant new customs expressing women’s viewpoints and experiences and started placing an orange on the seder plate.

At an early point in the seder, she asked each person to take a segment of the orange, make the blessing over fruit and eat the segment in recognition of gay and lesbian Jews and of widows, orphans, Jews who are adopted and all others who sometimes feel marginalized in the Jewish community. She encouraged each guest to spit out the seeds in their orange segment to reject homophobia and hatred. The orange suggests the fruitfulness for all Jews when everyone in our community is a contributing and active member of Jewish life. (From The Wandering Is Over Haggadah, JewishBoston.com)

On January 6, 1941 President Franklin D. Roosevelt delivered an historic State of the Union Address. The world was increasingly gripped by brutal tyranny. On top of that, America was still recovering from the effects of the Great Depression. And it seemed almost impossible for the U.S. to stay out of the global fight for freedom.

In the address, FDR summarized what freedom meant—and why we would fight for it, here and abroad. That statement became known as the Four Freedoms–Freedom of Speech, Freedom of Worship, Freedom from Want, Freedom from Fear:

In the future days, which we seek to make secure, we look forward to a world founded upon four essential human freedoms.

The first is freedom of speech and expression—everywhere in the world.

The second is freedom of every person to worship God in his own way—everywhere in the world.

The third is freedom from want—which, translated into world terms, means economic understandings which will secure to every nation a healthy peacetime life for its inhabitants—everywhere in the world.

The fourth is freedom from fear—which, translated into world terms, means a world-wide reduction of armaments to such a point and in such a thorough fashion that no nation will be in a position to commit an act of physical aggression against any neighbor—anywhere in the world.

That is no vision of a distant millennium. It is a definite basis for a kind of world attainable in our own time and generation. That kind of world is the very antithesis of the so-called new order of tyranny which the dictators seek to create with the crash of a bomb.

Some will point out the hypocrisies and ironies of the statement. At that point in American history, millions were not free and were under attack because of their race, religion, and economic circumstances. Maybe the biggest irony of all is that the final call for disarmament and the final phrase “crash of a bomb” ultimately faced the reality of a horrific war and an unthinkable bomb to end it.

But as a goal and aspiration, the Four Freedoms still ring out. Maybe we can ring them this Passover.

The posters above are by Norman Rockwell. Maybe more famous than FDR’s speech are the propaganda posters that Rockwell painted based on the Four Freedoms. As with the speech, some complain that Rockwell’s America was over-idealized and far too white. Probably so, and the images themselves may look quaint and, from today’s perspective, backward looking.

To counter that, following are a couple of works from Ben Shahn, an illustrator who was contemporary with Rockwell, artistically his equal, culturally his opposite:

Ben Shahn was born in Kovno, Russia on September 12, 1898 to Joshua Hessel and Gittel (Lieberman) Shahn and died on March 14, 1969. A Jewish-born artist, muralist, social activist, photographer and teacher, he is best known for his works of Social realism…From May to June of 1933, Shahn served as an assistant to Diego Rivera while the artist executed the infamous Rockefeller Center mural. By circulating a petition among the workers to keep the mural on display, Shahn played an important role in fanning the controversy.

Among his many famous works, in 1930 Shahn created a series of watercolor drawings for a Passover Haggadah. In 1965 these drawings were incorporated into a complete haggadah. Here, in an illustration called The Bread of Affliction, the hand of God leads the people out Egypt: 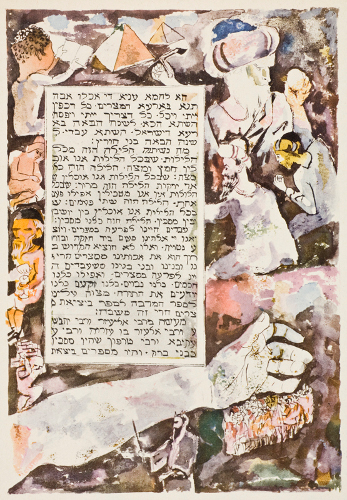 And here is a bit of Shahn’s later work, part of a series of union posters urging people to register and vote: 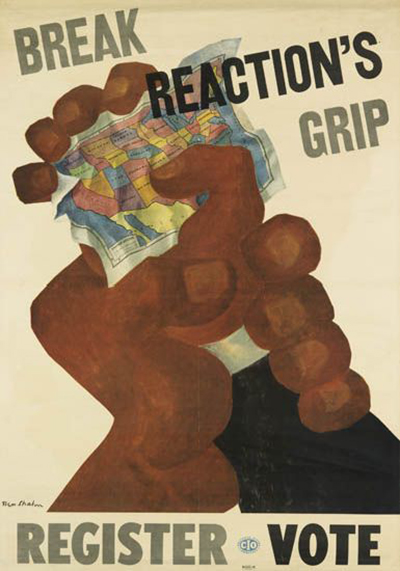