Jack Cristil: The Voice of God is Gone

There are two ways you might know Jack Cristil, who died this weekend at the age of 88. But maybe not.

If you’re from Mississippi, or an SEC sports fan, you know him as the The Voice of Mississippi State football and basketball for almost sixty years, until his retirement in 2011.

If you are a member of the Tupelo Jewish community, where Jack was an essential part of Temple B’nai Israel for almost that long, you know him, more or less, as The Voice of God. In addition to his leadership roles in the congregation, Jack frequently led services. Most of us have heard clergy and lay people at the pulpit with some memorable voices and presences. Jack stood above them all. That perfectly modulated baritone, driven by his deep and unshakable faith, gave us all the play-by-play for a different sort of game, season after season.

That extraordinary voice would mean nothing without the man behind it—just a trick of vocal cords and breath. But Jack’s mind and heart were even bigger than that voice. Which is why when he spoke on the radio or at services, or in the more intimate setting of a meeting or conversation, you listened. Some people get our attention by the way they say things, and Jack could get anybody’s attention. But others keep our attention because of what they say, and even more, who they are.

In case you still think that Jack was not so well-known or important, see the above book cover from a biography of him. You may not have heard of Jack or of the author, veteran Mississippi journalist Sid Salter. But the man who wrote the Foreword to Jack’s biography is a little more familiar—a Memphis-based writer named John Grisham.

And if that’s not famous enough, here’s a photo of Jack interviewing Elvis: 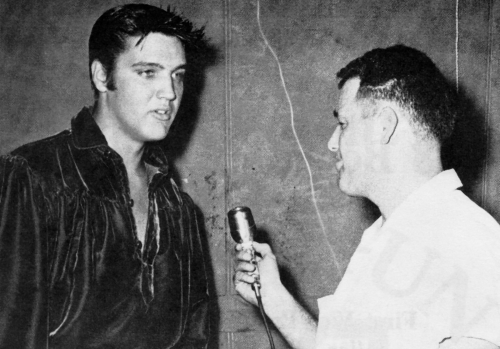 Jack is gone, but anyone who has heard that voice, even once, will hear it forever. One of Jack’s favorite bits in services was to ask the congregation to turn to a particular page in the prayer book and to indicate having done so by being seated. Today, we indicate our love and respect by standing up. We hear you, Jack.