If we measure creative success by the dollars generated through adaptation and exploitation, PKD was a monumental success, though he didn’t live to see most of it. His work was the source material for Blade Runner, Total Recall, Minority Report and other films.

If the measure of creativity is being creative, PKD is more than just the most adventurous science fiction/speculative fiction writer of his generation. Maybe no other writer of his century, or even now, has so masterfully taken readers to the edge, and then taken them a little further. In their view of the world, many of those readers never quite come back.

PKD lived, at least in his mind, beyond that edge. His mental instability is a matter of record, though there is still and will be questions about exactly what the clinical profile was.

In 1974 PKD had what can be called a religious experience. The comic artist R. Crumb illustrated some of that experience, as related by PKD. You can view the entire comic here. 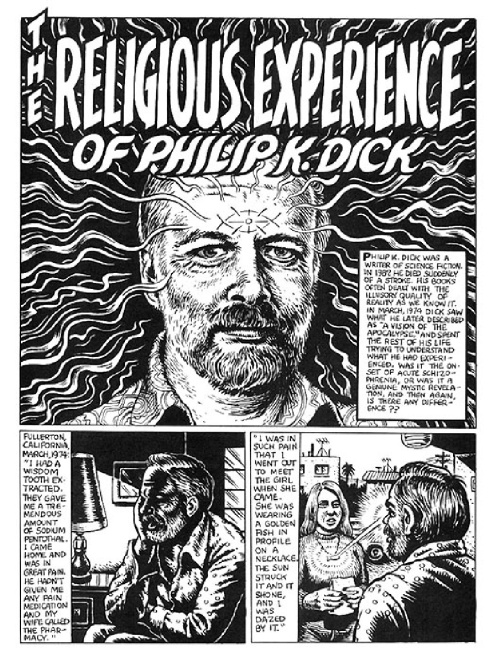 “There will come a time when it isn’t ‘They’re spying on me through my phone’ anymore. Eventually, it will be ‘My phone is spying on me’.” ― Philip K. Dick