Howard Finster on the Day after Washington’s Fake Birthday 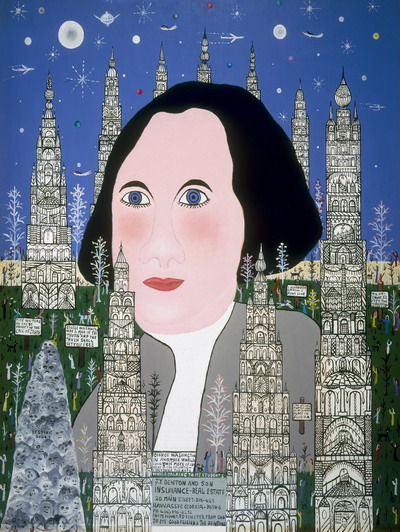 This is about Howard Finster, “Man of Visions”, not strictly about George Washington. But Finster, America’s greatest modern folk/self-taught artist, loved Washington and frequently pictured him (above is Washington in Another World, where Finster believed he would meet the great man one day).

Finster also liked Abraham Lincoln, and some of the artist’s more than 10,000 works featured that former President. 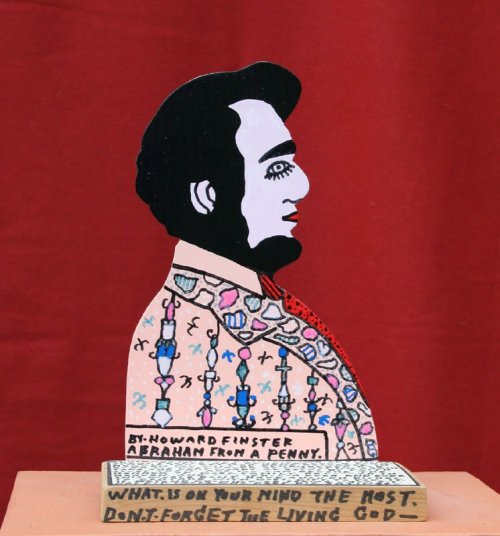 Knowing Finster’s biography and back story is interesting and helpful, but looking at his pictures (and there are plenty to be found online) is much more enlightening and uplifting. This is from Artnet:

Howard Finster (American, December 2, 1916–October 22, 2001) was a Modern Folk artist from Summerville, GA. He was one of 13 children raised on a farm, and he attended school only until the sixth grade. Finster’s interest in the gospel began at a Baptist revival when he was just 13 years old. A preacher at age 16, he wrote articles for the local newspaper while giving sermons in churches. In the late 1940s, Finster built his first garden park museum, featuring the exhibit The Inventions of Mankind.

The exhibit was intended to be a representation of all the inventions ever created, and it included a duck pond and a flock of pigeons. In 1961, Finster ran out of space and decided to purchase four additional acres of land in Pennville, GA. This is where he envisioned the Plant Farm Museum, a collection of Garden of Eden-like creations featuring attractions such as The Mirror House, Bible House, and the Folk Art Chapel. Scattered throughout were signs containing Bible verses, because Finster believed that “They stuck in people’s heads better that way.”

Finster did not learn how to paint in a university; instead he was self-taught, and most of his work was inspired by visions. He believed he was sent to Earth to spread the word of God, and he retired from preaching in 1965 to improve his Plant Farm Museum. This lasted until 1976, when he was inspired to paint only sacred art of religious inspiration that was intended to uplift and inspire. These images ranged from Pop icons to religious figures, such as his interpretation of John the Baptist. A year earlier, Finster was featured in Esquire magazine, and was eventually asked to create four paintings for the Library of Congress in 1977, one of which was titled He Could Not Be Hid.

Finster often created images on flat picture planes with Bible verses squeezed in. Each one also included a number because, under God’s direction, he felt he had to generate a total of 5,000 paintings. Finster finished this feat in 1985, but continued to paint until his death in 2001. By then, he had created over 10,000 works of art.

You can think real hard about how we celebrate Washington’s birthday on a day that isn’t his birthday, and how some people mistakenly call it President’s Day, and how we don’t celebrate Lincoln’s birthday at all, despite the fact that he might win an Oscar this year.

Save yourself the trouble. Immerse yourself in the visions of Howard Finster, and everything will make sense to you.