Nuns getting arrested at a U.S. Capitol protest gives us hope 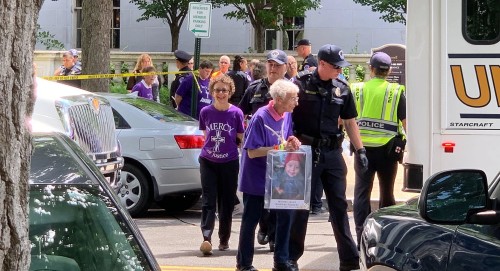 In recent decades, clergy and related religious were literally at the front lines of the civil rights and Vietnam War movements, along with other movements promoting—demanding—social justice, morality and peace.

Seeing the protest pictured above and described below, it seems that the same faithful forces are standing up and speaking out in the face of the very high-level and public devolution of basic moral and ethical principles (such as truth telling and all the other commandments and recommended conduct).

WASHINGTON (RNS) — Police arrested dozens of protestors, including many Roman Catholic nuns, at a rally Thursday (July 18) opposing the Trump administration’s treatment of immigrant children along the Southern border, treatment that organizers of the demonstration said amounted to atrocities.

Officials with the advocacy groups Faith in Public Life and Faith in Action faithinaction.org   reported that 70 people were arrested after hundreds of demonstrators who had gathered on the lawn of the U.S. Capitol to sing hymns and wave signs with slogans such as “Everyone is sacred” and “Honor the Children: End child detention” crossed the street to enter the Russell Senate Office Building’s rotunda.

Some of the demonstrators stopped to lie down on the rotunda floor in the shape of a cross. They chanted the Hail Mary prayer several times while holding images of what organizers said were immigrant children who have died in U.S. custody.

Capitol police eventually began arresting demonstrators, among them Jesuit brothers and nuns from orders such as the Sisters of Mercy. The group recited the Lord’s Prayer as members were led away to buses waiting outside, leaving images of children scattered across the rotunda floor.

As officers escorted the handcuffed demonstrators into the buses, observers on the sidewalk burst into applause.

About Faith in Public Life:

Faith in Public Life is a national network of nearly 50,000 clergy and faith leaders united in the prophetic pursuit of justice and the common good. Faith in Public Life has played an important role in changing the narrative about the role of faith in politics, winning major progressive policy victories, and empowering new religious leaders to fight for social justice and the common good. Our media expertise, rapid-response capabilities and strategic campaign development have made us respected commentators in the media and valued partners with a range of religious groups working for economic and social justice.

About Faith in Action:

The struggle over the direction of the country is not just about economics or politics. It is a spiritual struggle over who we are and how we are connected. Many people, especially younger people, have lost faith in institutions and have distanced themselves from traditional religious congregations. But people are still searching for spiritual connection and purpose. Through our organizing work, we believe individuals will be able to say “as a result of my participation in Faith in Action, my life is better and I see the world and myself differently.”