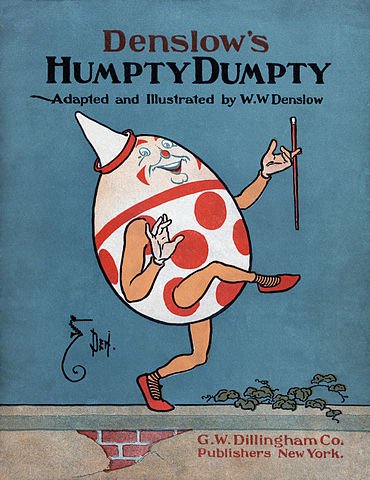 “Humpty dumpty” was eighteenth-century slang for a short and clumsy person. (Dictionary of Slang and Unconventional English)

Through the Looking Glass (Alice in Wonderland), Chapter 6

‘And how exactly like an egg he is!’ she said aloud, standing with her hands ready to catch him, for she was every moment expecting him to fall.

‘It’s very provoking,’ Humpty Dumpty said after a long silence, looking away from Alice as he spoke, ‘to be called an egg — very!’

‘I said you looked like an egg, Sir,’ Alice gently explained. ‘And some eggs are very pretty, you know’ she added, hoping to turn her remark into a sort of a compliment.

‘Some people,’ said Humpty Dumpty, looking away from her as usual, ‘have no more sense than a baby!’…

‘What a beautiful belt you’ve got on!’ Alice suddenly remarked.

(They had had quite enough of the subject of age, she thought: and if they really were to take turns in choosing subjects, it was her turn now.) ‘At least,’ she corrected herself on second thoughts, ‘a beautiful cravat, I should have said — no, a belt, I mean — I beg your pardon!’ she added in dismay, for Humpty Dumpty looked thoroughly offended, and she began to wish she hadn’t chosen that subject. ‘If I only knew,’ the thought to herself, ‘which was neck and which was waist!’

Evidently Humpty Dumpty was very angry, though he said nothing for a minute or two. When he did speak again, it was in a deep growl.

‘I know it’s very ignorant of me,’ Alice said, in so humble a tone that Humpty Dumpty relented.

‘When I use a word,’ Humpty Dumpty said in rather a scornful tone, ‘it means just what I choose it to mean — neither more nor less.’

‘The question is,’ said Alice, ‘whether you can make words mean so many different things.’

‘The question is,’ said Humpty Dumpty, ‘which is to be master — that’s all.’