The Maddening Sound of Guilt: Poe’s The Tell-Tale Heart 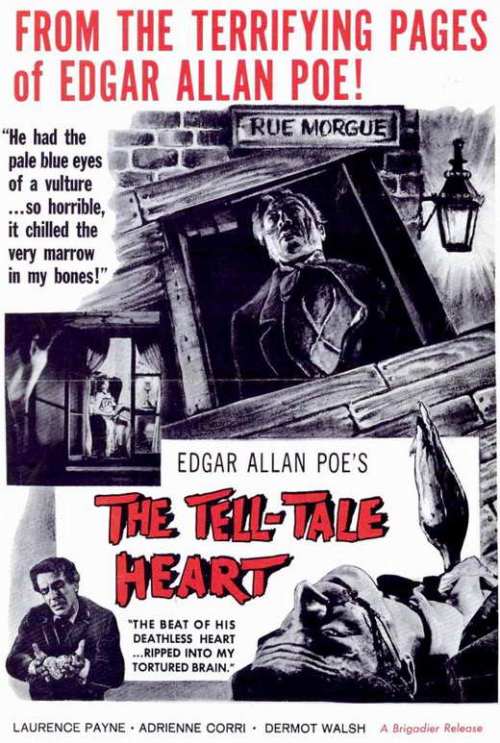 I foamed—I raved—I swore! I swung the chair upon which I had been sitting, and grated it upon the boards, but the noise arose over all and continually increased. It grew louder—louder—louder! And still the men chatted pleasantly, and smiled. Was it possible they heard not? Almighty God!—no, no! They heard!—they suspected!—they knew!—they were making a mockery of my horror!
Edgar Allan Poe, The Tell-Tale Heart

Edgar Allan Poe’s The Tell-Tale Heart (1843) is the story of someone who murders an old man, dismembers and hides the body beneath the floor boards, and is then driven to confess by the sound of the still beating heart.

A lesson for those who hide the truth and think they have nothing to fear. Even for the conscience-free, this is how it ends, with the police at the door.

From The Tell-Tale Heart:

As the bell sounded the hour, there came a knocking at the street door. I went down to open it with a light heart,—for what had I now to fear? There entered three men, who introduced themselves, with perfect suavity, as officers of the police. A shriek had been heard by a neighbor during the night; suspicion of foul play had been aroused; information had been lodged at the police office, and they (the officers) had been deputed to search the premises.

I smiled,—for what had I to fear? I bade the gentlemen welcome. The shriek, I said, was my own in a dream. The old man, I mentioned, was absent in the country. I took my visitors all over the house. I bade them search—search well. I led them, at length, to his chamber. I showed them his treasures, secure, undisturbed. In the enthusiasm of my confidence, I brought chairs into the room, and desired them here to rest from their fatigues, while I myself, in the wild audacity of my perfect triumph, placed my own seat upon the very spot beneath which reposed the corpse of the victim.

The officers were satisfied. My manner had convinced them. I was singularly at ease. They sat, and while I answered cheerily, they chatted of familiar things. But, ere long, I felt myself getting pale and wished them gone. My head ached, and I fancied a ringing in my ears: but still they sat and still chatted. The ringing became more distinct:—it continued and became more distinct: I talked more freely to get rid of the feeling: but it continued and gained definiteness—until, at length, I found that the noise was not within my ears.

No doubt I now grew very pale;—but I talked more fluently, and with a heightened voice. Yet the sound increased—and what could I do? It was a low, dull, quick sound—much such a sound as a watch makes when enveloped in cotton. I gasped for breath—and yet the officers heard it not. I talked more quickly—more vehemently; but the noise steadily increased. I arose and argued about trifles, in a high key and with violent gesticulations; but the noise steadily increased. Why would they not be gone? I paced the floor to and fro with heavy strides, as if excited to fury by the observations of the men—but the noise steadily increased. Oh God! what could I do? I foamed—I raved—I swore! I swung the chair upon which I had been sitting, and grated it upon the boards, but the noise arose over all and continually increased. It grew louder—louder—louder! And still the men chatted pleasantly, and smiled. Was it possible they heard not? Almighty God!—no, no! They heard!—they suspected!—they knew!—they were making a mockery of my horror!—this I thought, and this I think. But anything was better than this agony! Anything was more tolerable than this derision! I could bear those hypocritical smiles no longer! I felt that I must scream or die! and now—again!—hark! louder! louder! louder! louder!—

“Villains!” I shrieked, “dissemble no more! I admit the deed!—tear up the planks!—here, here!—it is the beating of his hideous heart!”