Emergency Powers and The Rise 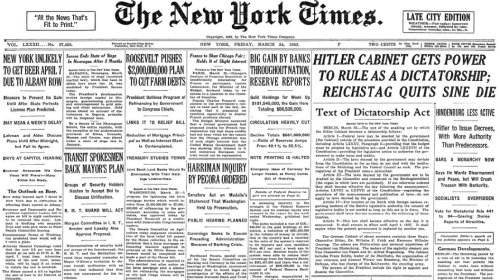 “Put even more simply, the German Parliament would be requested to turn over its constitutional functions to Hitler and take a long vacation.”
William L. Shirer, The Rise and Fall of the Third Reich

Williams L. Shirer’s The Rise and Fall of the Third Reich remains, almost sixty years after publication, the single most readable one-volume history of Nazi Germany. If you like history, but don’t think the story is relevant today, it is still a good read. If you think it might have some relevance, it is essential.

Hitler came to power without ever winning the presidency (he came in second in 1932) and without the Nazis ever having a majority in parliament. Yet in 1933, the Nazis were in control, all civil rights were abrogated, and Hitler would remain until 1945 dictator of one of history’s most infamous, oppressive and deadly regimes.

On February 27, 1933, the Reichstag, home of German parliament, was burned down. It was blamed on Communists, but it was actually the work of the Nazis. The Reichstag fire was an excuse to seize absolute power. Shirer writes:

On the day following the fire, February 28, he [Hitler] prevailed on President Hindenburg to sign a decree “for the Protection of the People and the State” suspending the seven sections of the constitution which guaranteed individual and civil liberties. Described as a “defensive measure against Communist acts of violence endangering the state,” the decree laid down that:

Restrictions on personal liberty, on the right of free expression of opinion, including freedom of the press; on the rights of assembly and association; and violations of the privacy of postal, telegraphic and telephonic communications; and warrants for house searchers, orders for confiscations as well as restrictions on property, are also permissible beyond the legal limits otherwise prescribed.

In addition, the decree authorized the Reich government to take over complete power in the federal states when necessary and imposed the death sentence for a number of crimes, including “serious disturbances of the peace” by armed persons….

With all the resources of the national and Prussian governments at their disposal and with plenty of money from big business in their coffers, the Nazis carried on an election propaganda such as Germany had never seen before. For the first time the State-run radio carried the voices of Hitler, Goering and Goebbels to every corner of the land. The streets, bedecked with swastika flags, echoed to the tramp of the storm troopers. There were mass rallies, torchlight parades, the din of loudspeakers in the squares. The billboards were plastered with flamboyant Nazi posters and at night bonfires lit up the hills. The electorate was in turn cajoled with promises of a German paradise, intimidated by the brown terror in the streets and frightened by “revelations” about the Communist “revolution.” The day after the Reichstag fire the Prussian government issued a long statement declaring that it had found Communist “documents” proving:

Government buildings, museums, mansions and essential plants were to be burned down… Women and children were to be sent in front of terrorist groups… The burning of the Reichstag was to be the signal for a bloody insurrection and civil war… It has been ascertained that today was to have seen throughout Germany terrorist acts against individual persons, against private property, and against the life and limb of the peaceful population, and also the beginning of general civil war.

Publication of the “documents proving the Communist conspiracy” was promised, but never made. The fact, however, that the Prussian government itself vouched for their authenticity impressed many Germans….

On March 5, 1933, the day of the last democratic elections they were to know during Hitler’s life, they spoke with their ballots. Despite all the terror and intimidation, the majority of them rejected Hitler. The Nazis led the polling with 17,277,180 votes—an increase of some five and a half million, but it comprised only 44 per cent of the total vote. A clear majority still eluded Hitler. All the persecution and suppression of the previous weeks did not prevent the Center Party from actually increasing its vote from 4,230,600 to 4,424,900; with its ally, the Catholic Bavarian People’s Party, it obtained a total of five and a half million votes. Even the Social Democrats held their position as the second largest party, polling 7,181,629 votes, a drop of only 70,000. The Communists lost a million supporters but still polled 4,848,058 votes. The Nationalists [Nazis], led by Papen and Hugenberg, were bitterly disappointed with their own showing, a vote of 3,136,760, a mere 8 per cent of the votes cast and a gain of less than 200,000.

Still, the Nationalists’ 52 seats, added to the 288 of the Nazis, gave the government a majority of 16 in the Reichstag. This was enough, perhaps, to carry on the day-to-day business of government but it was far short of the two-thirds majority which Hitler needed to carry out a new, bold plan to establish his dictatorship by consent of Parliament.

The plan was deceptively simple and had the advantage of cloaking the seizure of absolute power in legality. The Reichstag would be asked to pass an “enabling act” conferring on Hitler’s cabinet exclusive legislative powers for four years. Put even more simply, the German Parliament would be requested to turn over its constitutional functions to Hitler and take a long vacation.