What If Nixon Had Gone to the Russians for the Watergate Money? 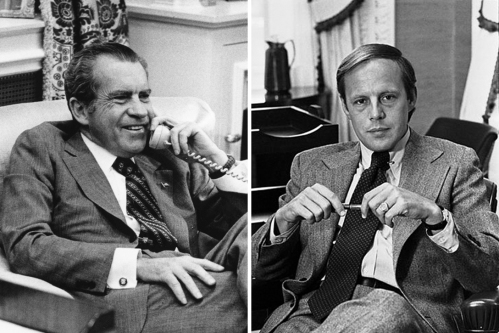 John Dean: I would say these people are going to cost a million dollars over the next two years.
President Nixon: We could get that. If you—on the money, if you need the money, I mean, you could get the money fairly easily. From the Russians. (sentence added)
The Nixon Tapes

You can be forgiven if you’re not thinking about Watergate in the context of current presidential corruption. It was a long time ago, and unlike Trump, Richard Nixon, while evil, was actually a very smart and capable man, who did a few good things and some very bad things as president.

I do think about Watergate, and today remembered one of the infamous conspirational conversations recorded on the Nixon Tapes. Here Nixon discusses with his White House Counsel John Dean paying a million dollars in hush money to the Watergate defendants. I wondered what it would have been like if Nixon suggested raising the money from the Russians—then as now our enemies.

John Dean: Where are the soft spots on this? Well, first of all, there’s the problem of the continued blackmail—

Dean: —which will not only go on now, it’ll go on when these people are in prison, and it will compound the obstruction-of-justice situation. It’ll cost money. It’s dangerous. Nobody, nothing—people around here are not pros at this sort of thing. This is the sort of thing Mafia people can do: washing money, getting clean money, and things like that. We just don’t know about those things, because we’re not used to, you know, we’re not criminals. We’re not used to dealing in that business. It’s a—

Dean: It’s a tough thing to know how to do.

President Nixon: Maybe we can’t even do that.

Dean: That’s right. It’s a real problem as to whether we could even do it. Plus, there’s a real problem in raising money. [Attorney General John] Mitchell has been working on raising some money, feeling he’s got, you know, he’s got—he’s one of the ones with the most to lose. But there’s no denying the fact that the White House and [John] Ehrlichman, [Bob] Haldeman, and Dean are involved in some of the early money decisions.

President Nixon: How much money do you need?

Dean: I would say these people are going to cost a million dollars over the next two years.

President Nixon: We could get that.

President Nixon: If you—on the money, if you need the money, I mean, you could get the money fairly easily.

Dean: Well, I think that we’re—

President Nixon: What I meant is, you could get a million dollars. And you could get it in cash. I know where it could be gotten.

President Nixon: I mean, it’s not easy, but it could be done. From the Russians. (sentence added)