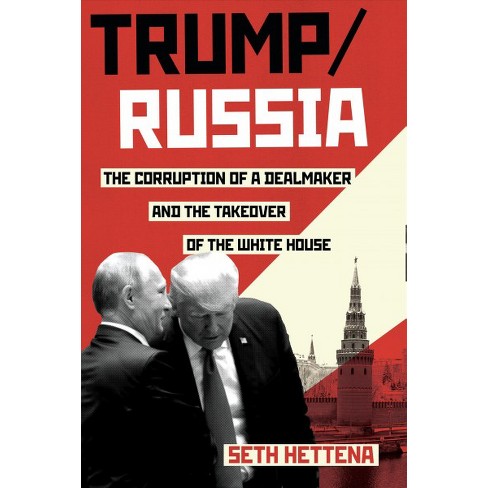 It was during the Moscow trip that Sater used his Kremlin connections to impress Trump’s daughter. Sater would later boast: “I arranged for Ivanka to sit in Putin’s private chair at his desk and office in the Kremlin.”
Trump/Russia: A Definitive History

Next week, the book Trump/Russia: A Definitive History will be released—and it will be explosive.

Written by Seth Hettena, an award-winning journalist who was a long-time investigative reporter for the Associated Press, it “chronicles the many years Trump has spent wooing Russian money and power. From the collapse of his casino empire—which left Trump desperate for cash—and his first contacts with Russian deal-makers and financiers, on up to the White House.”

The only excerpt available so far was published in Rolling Stone, A Brief History of Michael Cohen’s Criminal Ties. That brief excerpt paints one corner of a bigger picture that we will finally be able to see once the Mueller investigation is complete.

From Trump/Russia: A Definitive History:

Michael Cohen’s bare-knuckled tactics earned him the nickname of “Tom,” a reference to Tom Hagen, the consigliore to Mafia Don Vito Corleone in The Godfather. He grew up on Long Island, the son of a physician who survived the Holocaust in Poland, and like Tom Hagen spent a childhood around organized crime, specifically the Russian Mafiya. Cohen’s uncle, Morton Levine, was a wealthy Brooklyn doctor who owned the El Caribe Country Club, a Brooklyn catering hall and event space that was a well-known hangout for Russian gangsters. Cohen and his siblings all had ownership stakes in the club, which rented for years to the first Mafiya boss of Brighton Beach, Evsei Agron, along with his successors, Marat Balagula and Boris Nayfeld. (Cohen’s uncle said his nephew gave up his stake in the club after Trump’s election.)

I spoke to two former federal investigators who told me Cohen was introduced to Donald Trump by his father-in-law, Fima Shusterman, a naturalized U.S. citizen from Ukraine who arrived in the U.S. in 1975. Shusterman was in the garment business and owned a fleet of taxicabs with his partners, Shalva Botier and Edward Zubok – all three men were convicted of a money-laundering related offense in 1993….

Shusterman, who owned at least four New York taxi companies, also set his son-in-law up in the yellow cab business. Cohen once ran 260 yellow cabs with his Ukrainian-born partner, the “taxi king” Simon V. Garber, until their partnership ended acrimoniously in 2012…

Cohen was able to purchase a $1 million condo at Trump World Tower in 2001, persuading his parents, his Ukrainian in-laws and Garber to do the same in other Trump buildings. Cohen’s in-laws Fima and Ania Shusterman bought three units in Trump World Tower worth a combined $7.66 million. Cohen later purchased a nearly $5 million unit in Trump Park Avenue. In a five-year period, he and people connected to him would purchase Trump properties worth $17.3 million….

A year after Trump World Tower opened in 2002, Trump had agreed to let Miami father-and-son developers Gil and Michael Dezer use his name on what ultimately became six Sunny Isles Beach condominium towers, which drew in new moneyed Russians all too eager to pay millions. “Russians love the Trump brand,” said Gil Dezer, who added that Russians and Russian-Americans bought some 200 of the 2,000 or so units in Trump buildings he built. A seventh Trump-branded hotel tower built up Sunny Isles into what ostensibly has become a South Florida Brighton Beach.

An investigation by Reuters found that at least 63 individuals with Russian passports or addresses have bought at least $98.4 million worth of property in the seven Trump-branded luxury towers. And that was a conservative estimate. At least 703 – or about one-third – of the 2044 units were owned by limited liability companies, or LLCs, which could conceal the property’s true owner. Executives from Gazprom and other Russian natural resource giants also owned units in Trump’s Sunny Isles towers. In an observation that several people I spoke with echoed, Kenneth McCallion, a former prosecutor who tracked the flows of Russian criminal money into Trump’s properties, told me, “Trump’s genius – or evil genius – was, instead of Russian criminal money being passive, incidental income, it became a central part of his business plan.” McCallion continued, “It’s not called ‘Little Moscow’ for nothing. The street signs are in Russian. But his towers there were built specifically for the Russian middle-class criminal.”

Cohen joined the Trump Organization around the time that the second Sunny Isles tower was being built. A few years earlier, he had invested $1.5 million in a short-lived Miami-based casino boat venture run by his two Ukrainian business partners, Arkady Vaygensberg and Leonid Tatarchuk. Only three months after its maiden voyage, it would become the subject of a large fraud investigation. But Cohen was saved from his bad investment by none other than Trump himself, who hired Cohen as an attorney just before his casino ship sank. A source who investigated Cohen’s connections to Russia told me, “Say you want to get money into the country and maybe you’re a bit suspect. The Trump organization used lawyers to allow people to get money into the country.”…

Michael Cohen’s in-laws, the Shustermans, also bought real estate in Sunny Isles. The development was paying off. Trump’s oldest son, Don Jr., would later note, “We see a lot of money pouring in from Russia.” There is no question Trump owed his comeback in large part to wealthy Russian expatriates.

Cohen and Felix Sater have known each other for nearly 30 years. They met in Brighton Beach when Cohen started dating his future wife, Shusterman’s daughter, Laura, who Sater says he knew from the neighborhood. When Cohen joined the Trump organization, Sater had become a fixture in the office. Sater was developing Trump SoHo, a hotel-condo in lower Manhattan that later would be consumed by scandal, and had earned Trump’s trust. Trump asked him to look after his children, Ivanka and Don Jr., on a 2006 visit to Moscow. (It was during the Moscow trip that Sater used his Kremlin connections to impress Trump’s daughter. Sater would later boast: “I arranged for Ivanka to sit in Putin’s private chair at his desk and office in the Kremlin.”) When Sater’s criminal past was exposed in The New York Times, Trump suddenly looked and acted like a man with something to hide. Despite laying claim to “one of the great memories of all time,” he seemed to be having trouble recollecting who Sater was. “Felix Sater, boy, I have to even think about it,” Trump told The Associated Press in 2015. “I’m not that familiar with him.”