In times of crisis, real or imagined, ordinary citizens can be asked or expected to serve as the eyes, ears and hands of law and order—in both democratic and authoritarian societies. There are fine lines between being a patriotic informant, a spy on your neighbors, and an active accomplice and collaborator.

A current exhibition at the United States Holocaust Memorial Museum is Some Were Neighbors: Collaboration & Complicity in the Holocaust:

Some Were Neighbors: Collaboration & Complicity in the Holocaust addresses one of the central questions about the Holocaust: How was it possible? The central role of Hitler and other Nazi Party leaders is indisputable. However, the dependence of these perpetrators on countless others for the execution of Nazi racial policies is less understood. Within Nazi Germany and across German-dominated Europe, circles of collaboration and complicity rippled throughout governments and societies wherever victims of persecution and mass murder lived.

Some Were Neighbors examines a variety of motives and pressures that influenced individual choices to act. These influences often reflect fear, indifference, antisemitism, career concerns, community standing, peer pressure, or chances for material gain. It also looks at individuals who did not give in to the opportunities and temptations to betray their fellow human beings, reminding us that there is an alternative to complicity in evil acts—even in extraordinary times. 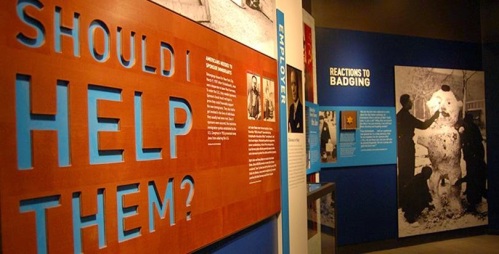