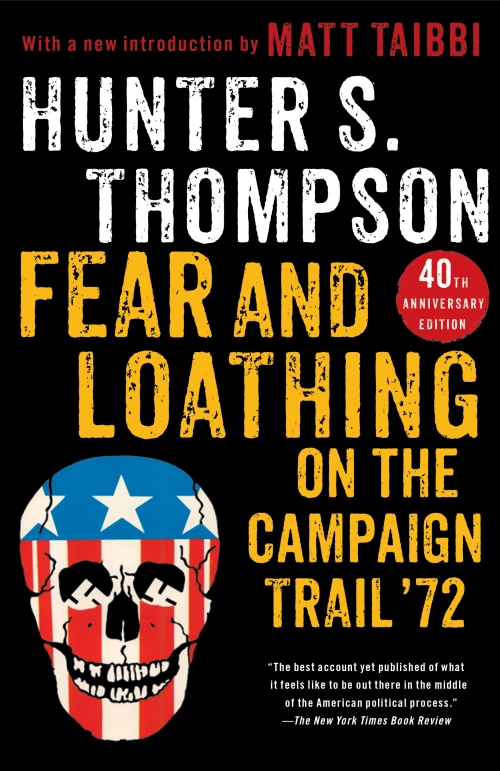 Hunter S. Thompson developed one of the most original and irresistible voices in American journalism. He killed himself in 2005, and nowhere is his work more missed than in politics.

To sample that voice, you can and should try The Great Shark Hunt, the best single volume collection of excerpts from his many years and areas of coverage. If you just want to see what he did for and to political journalism, read Fear and Loathing on the Campaign Trail ’72.

We can only wonder what he would make of this political season and of the major party candidates for President. Wish he was here. That would be something. From his first exposure to Richard Nixon, for example, Thompson saw right through to Nixon’s dark soul. Maybe he wasn’t the only one who saw it, but he was the only journalist who would talk about it at all. Talk about it in ways that seemed borderline deranged, because faced with twisted truth, sometimes only the twisted can tell it like it is. Or as Thompson liked to say, “When the going gets weird, the weird turn pro.”

Thanks to him, it’s a little more common now to hear a bit more seemingly immoderate but completely justified criticism of questionable candidates. But not as much as we need and not as much as is deserved. Not as much as Thompson would have handed out.

Here is an excerpt from Thompson’s 1994 obituary for Nixon (“He Was a Crook”).   Note his criticism of the failures of “Objective Journalism” when journalists are faced with the extraordinary.

Kissinger was only one of the many historians who suddenly came to see Nixon as more than the sum of his many squalid parts. He seemed to be saying that History will not have to absolve Nixon, because he has already done it himself in a massive act of will and crazed arrogance that already ranks him supreme, along with other Nietzschean supermen like Hitler, Jesus, Bismarck and the Emperor Hirohito. These revisionists have catapulted Nixon to the status of an American Caesar, claiming that when the definitive history of the 20th century is written, no other president will come close to Nixon in stature. “He will dwarf FDR and Truman,” according to one scholar from Duke University.

It was all gibberish, of course. Nixon was no more a Saint than he was a Great President. He was more like Sammy Glick than Winston Churchill. He was a cheap crook and a merciless war criminal who bombed more people to death in Laos and Cambodia than the U.S. Army lost in all of World War II, and he denied it to the day of his death. When students at Kent State University, in Ohio, protested the bombing, he connived to have them attacked and slain by troops from the National Guard.

Some people will say that words like scum and rotten are wrong for Objective Journalism — which is true, but they miss the point. It was the built-in blind spots of the Objective rules and dogma that allowed Nixon to slither into the White House in the first place. He looked so good on paper that you could almost vote for him sight unseen. He seemed so all-American, so much like Horatio Alger, that he was able to slip through the cracks of Objective Journalism. You had to get Subjective to see Nixon clearly, and the shock of recognition was often painful.