How Good Is America? 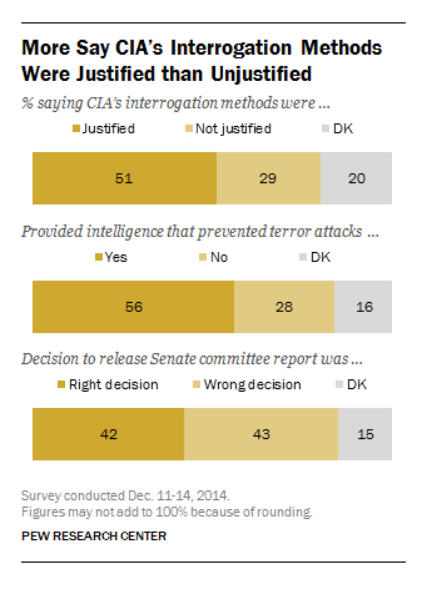 How good is America? A just released Pew Research survey about CIA torture tells us something.

“Goodness” like so many other positive qualities is vague and undefined, but like those qualities, you know it when you see it. We seem to have slipped beyond “the ends justify the means.” Some are now willing to adjust perspective so that “the ideology justifies the means,” where ideology includes irrational emotion, prejudice, and unsupported opinion. This isn’t the first time in American and world history where people have gone there. And it isn’t the only sector of society where this pertains. But we know or should have learned this: it never turns out well.

More than that, it is never good. There may be exceptional times when doing bad is necessary to prevent the worse, but it is never wholly good to do that or be that. Anyone who was not disgusted by the report of the CIA methods, even those who consider them justified, are a concern. If the half of America in the survey was not disgusted, even as they answered the question, that is a concern. Disgust can be much more valuable than mindless fear, and when we push blithely past that disgust to make a point, that can’t be good, and neither can we.