Thanksgiving and Hanukkah in America: A History 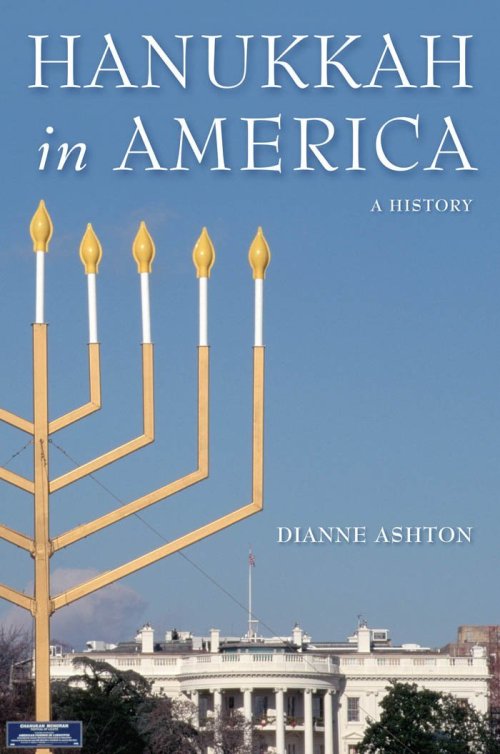 Hanukkah is getting lots more attention this year than it usually does, because it starts on Thanksgiving, rather than on or about Christmas.

This is nearly unprecedented. Of course there’s lots of controversy about just how rare it is, partly because Thanksgiving has officially moved from the last Thursday in November to the fourth Thursday, partly because the Jewish calendar is a lunar calendar, partly because of some esoterica of interest to extreme calendar freaks. Some say it won’t happen again for 70,000 years, others say it will never, ever happen again. If you happen to be around when it does, if it does, please e-mail, post, tweet, or whatever sort of advanced messaging will be used then to communicate with the curious but departed.

Thanksgivingukkah, or whatever other ridiculous and ear-hurting names people are coming up with, is second only to Black Friday as a cultural meme this week. We will be seeing lots of turkeys with Hanukkah candles stuck in them—actual ones, not just Photoshopped ones, at actual Thanksgiving tables, with plenty of videos to prove it. Might even see some turkey selfies. On the food front, we will have combined cuisines, where things not usually seen on the Thanksgiving table make an appearance, such as latkes and sour cream. (Note: I am promoting latke stuffing as the best of all possible hybrids.)

There’s a lot to talk about when Hanukkah and Christmas collide and coincide, theologically, historically and socially. Both involve charismatic Jewish religious leaders taking on tyranny—though one battles on the military and political front, while the other wields an entirely different set of weapons. As a central theme, both at some point take on the profaning of the Temple, in one case made unholy by soldiers, in the other made unholy by turning sacred space into a commercial enterprise. Both involve miracles and miraculous lights challenging the darkness. Not to mention that at the time of Jesus, Jews knew and marked the events of the Maccabee revolution, which had taken place less than two hundred years earlier.

Whether you are Jewish, or just newly fascinated by Hanukkah because it is for once not getting lost in the Christmas mishegas (“craziness” in Yiddish), have I got a book for you. Hanukkah in America: A History by Dianne Ashton is more than just a review of how American Jews regarded and celebrated this once-minor holiday. It is the definitive and delightful book about how Hanukkah evolved to become a laboratory for what it means to be a Jew in America, and for that matter what it means to be Americans of any kind.

Here’s something Ashton writes about Thanksgiving and the “deluxe Hanukkah turkey dinner”:

Many Jews combined food products available in America with recipes they deemed appropriate for Hanukkah meals. Even with a simple meal at home, immigrants could imagine a different Hanukkah past than the one in Eastern Europe. They could envision a personal bond with Judah Maccabee by selecting Carmel wine, which claimed to be “what the Maccabees drank.” Local food shops such as Goldman’s Tea and Coffee Store held special sales in honor of Sabbath Hanukkah. Jewish restaurateurs sometimes targeted immigrants’ desires for American foods at special occasions. Perhaps no food is so identified with America as the turkey, an animal native to North America and the featured dish of the Thanksgiving dinners that take place across the country only a few weeks before Hanukkah. When Gorfein’s, a kosher restaurant, advertised a deluxe Hanukkah turkey dinner in the Forverts, it apologized in print the next day to “hundreds [who had to be] turned away” because the restaurant “had no space or food left for them.” Gorfein’s offered the same dinner a second night.

My usual Hanukkah post, sometime around Christmas, ends with a mention of a wonderful Comedy Central special, A Colbert Christmas: The Greatest Gift of All. Our comic saviors Jon Stewart and Stephen Colbert perform the song Can I Interest You In Hanukkah? with Stewart making the case for the Jewish holiday:

Jon: Can I interest you in Hanukkah? Maybe something in a Festival of Lights. It’s a sensible alternative to Christmas. And it lasts for seven – for you – eight nights.
Stephen: Hanukkah huh? I’ve never really thought about it.
Jon: Well, you could do worse.
Stephen: Is it merry?
Jon: It’s kind of merry.
Stephen: Is it cheery?
Jon: It’s got some cheer.
Stephen: Is it jolly?
Jon: Look, I wouldn’t know from jolly. But it’s not my least unfavorite time of year.
Stephen: When’s it start?
Jon: The 25th.
Stephen: Of December?
Jon: Kislev.
Stephen: Which is when exactly?
Jon: I will check
Stephen: Are there presents?
Jon: Yes, indeed eight days of presents. Which means one nice one, then a week of dreck.
Stephen: Does Hanukkah commemorate events profound and holy? A king who came to save the world?
Jon: No, oil that burned quite slowly.
Stephen: Well, it sounds fantastic!
Jon: There’s more. We have latkes.
Stephen: What are they?
Jon: Potato pancakes. We have dreidels.
Stephen: What are they?
Jon: Wooden tops. We have candles.
Stephen: What are they?
Jon: THEY ARE CANDLES! And when we light them, oh the fun it never stops. What do you say, Stephen, do you want to give Hanukkah a try?
Stephen: I’m trying see me as a Jew. I’m trying even harder. But I believe in Jesus Christ
So it’s a real non-starter.
Jon: I can’t interest you in Hanukkah? Just a little bit?
Stephen: No thanks I’ll pass. I’ll keep Jesus, you keep your potato pancakes. But I hope that you enjoy ‘em on behalf of all of the goyim.
Jon: Be sure to tell the Pontiff, my people say “good yontif”.
Stephen: That’s exactly what I’ll do.
Both: Happy holidays, you
Jon: too!
Stephen: Jew!
Jon: Too?

That’s it for this holiday mashup. Read the book; it’s great. Celebrate religious freedom by eating too much food. Spin the turkey. Light the candles. But whatever you do, don’t smoke the turkey, because it is impossible to keep that thing lit.