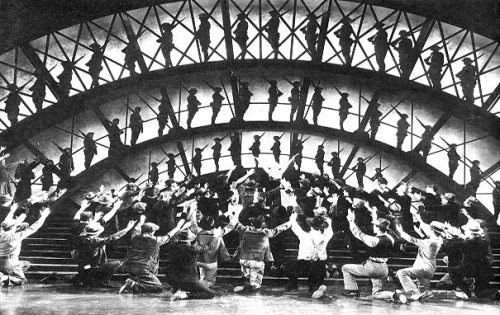 Gold Diggers of 1933 may be the strangest of all classic movies—and the one that has the most to say about Veterans Day 2013.

It is classic because it is still entertaining: snappy, cynical dialogue; singing and dancing that may be a little out of style, but Busby Berkeley production numbers that are still wonders of the world, in part because they were actually performed and filmed on sound stages—no special effects or shortcuts. Your jaw will drop in astonishment and delight.

The strangeness is that framing this jollity is a movie about the Depression—not as a backdrop but about it, head on. Nowhere is this incongruity more obvious than the close of the movie. There is a penultimate mega-happy ending, where the three down-on-their-luck showgirls marry the three rich Boston bluebloods. But just then, there is one last song and production number: Remember My Forgotten Man.

In 1932, most veterans of World War I were out of work, as were so many others. In 1924 the government had authorized a longstanding practice of offering bonuses to those who served in war. This took the form of Certificates of Service, which matured over 20 years, and were to be paid in annual installments. But in the midst of the Depression, the veterans didn’t need that money down the road—they needed it right now. A movement for immediate redemption of the certificates gained momentum (the amount was tens of billions of dollars in today’s money). So in 1932, 43,000 marchers—veterans, their families and their supporters—gathered in Washington in what came to be called the Bonus Army, to demand cash payment. This was rebuffed. President Hoover and Republicans in Congress believed that this would require a tax increase, and that a tax increase would delay the recovery of the economy.

These were the Forgotten Men. As the tragic climax of a musical comedy, we watch a sordid street scene, narrated in song by Gingers Rogers. She is now surviving as a prostitute, married to a war veteran abandoned by the government and the nation. On stage we see the troops marching off in glory to cheers and flag-waving, only to return broken and injured, with no one to greet or comfort them—or even to remember them.

I don’t know if he deserves a bit of sympathy,
Forget your sympathy, that’s all right with me.
I was satisfied to drift along from day to day,
Till they came and took my man away.

Remember my forgotten man,
You put a rifle in his hand;
You sent him far away,
You shouted, “Hip, hooray!”
But look at him today!

Remember my forgotten man,
You had him cultivate the land;
He walked behind the plow,
The sweat fell from his brow,
But look at him right now!

And once, he used to love me,
I was happy then;
He used to take care of me,
Won’t you bring him back again?
‘Cause ever since the world began,
A woman’s got to have a man;
Forgetting him, you see,
Means you’re forgetting me
Like my forgotten man.

Maybe the musicals of the 1930s are old-fashioned and for a lot of people unwatchable. Maybe Busby Berkeley is just some campy choreographer whose over-the-top numbers are funny but incomparable to today’s digital masterpieces. Then again, maybe ending a popular entertainment with a bleak and uncompromising plea to our national conscience isn’t a bad idea—and never goes out of style. Remember Our Forgotten People, circa 2013.