Why does the demise of an audio component deserve even one blog post, let alone two?

Because I came across the manual for the Sony STR-AV1010 receiver (circa 1989), which manual demonstrates that tech archaeology and history is as important as any other kind, maybe more. If you don’t believe that, just look at one of my favorite tech photos of all time. 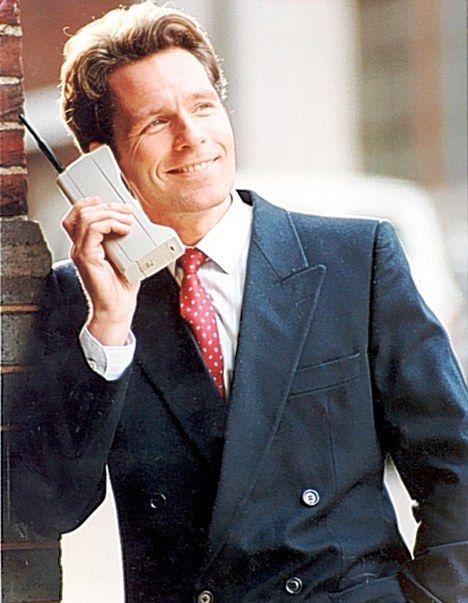 Here is a man who is implicitly the most successful, stylish and cool guy holding up the most ridiculous object to his ear, as we pretend (then) it is not. And it sort of isn’t, because he was able to do something that was until then the stuff of sci-fi. And yet it sort of is ridiculous, because, well, look at the photo.

The soon to be buried receiver (actually, it won’t be buried, instead being put in a storage closet until future science can figure out how to cure it) was, as noted in the earlier post, a wonder more than twenty years ago. Look at some of the possible connections in the above chart:

The point? Not one really. Maybe just that we are in the river, it flows, and we swim with it, against it, and sometimes just stand in it, if we can touch bottom and it doesn’t knock us over and we drown.

Familiar Faces and Founders Who Flee

George Zimmer, founder of Men’s Wearhouse, has been terminated from the company he grew—on the day of its annual meeting.

He moved (was kicked upstairs) from CEO to the position of executive chairman in 2011, and he still has a 3.5% stake in the company. It is thought that he may have had some trouble letting go of the reins—a not unusual circumstance—and his firing is the result of the attendant conflicts.

Everyone with a television knows the bearded Zimmer, and has heard him promise that when you wear one of their suits, “You’re going to like the way you look. I guarantee it.” And with 1,239 stores in the Men’s Wearhouse family, many have seen one of its outlets.

There are shareholders to please, a different situation than with Zimmer’s first store in Houston forty years ago. Times are changing for suits, ironically the very fact that Zimmer highlights in the latest series of ads. So if a fresh take was called for, both in the business and the marketing, he may have been seen as standing in the way.

You know George Zimmer. But do you know John Sculley?

Everybody who studies or practices big business does, but few others any more. In 1983, Steve Jobs recruited Sculley from Pepsico to run Apple. Differences almost immediately began cropping up about exactly how Apple was going to reach the next level on its way to make money (Sculley) or make money by changing the world (Jobs). It is reported that Sculley wanted to emphasize the Apple II until the Macintosh was powerful enough to fulfill its promise. No doubt where Jobs stood; just watch the historic Macintosh “1984” ad that ran during the Super Bowl that year. Jobs was demoted in 1985 and quickly left the company. Sculley would leave Apple in 1993, after a few successes but mostly under a cloud. Jobs would, of course, return to Apple—demonstrating in the long run just how potent a founder’s combination of entrepreneurship, vision and hard-nosed business can be. Today, practically everybody on the planet knows Steve Jobs.

George Zimmer didn’t sell the world’s most popular and powerful digital devices, actually changing the world. He sold men’s suits. Getting that isn’t so very tough, so he may be expendable. On the other hand, he has proven that over the course of four very tumultuous decades, he did know how to sell those suits.

Sometimes founders really can’t be trusted to evolve themselves or their offerings for a changing market and world. But the possibility that they can shouldn’t summarily be dismissed, and neither perhaps should they. George Zimmer may not be back. But we know who he is, to the benefit of Men’s Wearhouse.