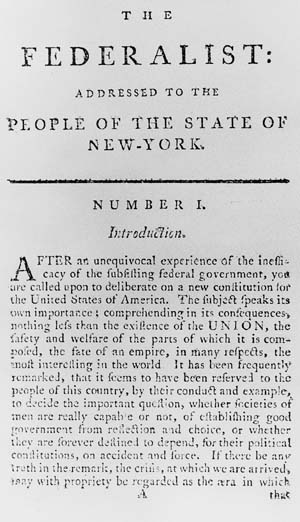 Publius Valerius Publicola (“friend of the people”) was a Roman consul who helped found the Roman Republic circa 509 BCE. When James Madison, Alexander Hamilton and John Jay began publishing The Federalist Papers in 1787, they attached his name to their arguments for adoption of the Constitution.

We don’t know how many current members of Congress have read the Federalist Papers—not even all 85 papers, maybe just a few. We also don’t know how many senior members of the executive branch have done so. We can assume that all nine Supreme Court Justices have; these are, after all, an essential part of the legislative history of the Constitution.

Every time you see politicians brandishing the Constitution as a weapon, well-meaningly or just plain meanly; every time you hear a half-baked political argument or analysis that makes absolutely no sense, but is based mostly or entirely on emotion or ambition; every time you wonder whether a particular politician is taking the best interests of the country to heart or is just interested I getting ahead, the Federalist Papers are your talisman.

The Federalist Papers are a brilliant combination of careful philosophy and political realities—a balance between aspiration and actuality, between the way we want to be and the way we are.

When we hear today about “grand bargains” being struck in Congress—or often not being reached at all—you have to laugh. The very same founders who are treated as saints or even gods had to make the grandest of all bargains so that this nation could exist and endure. And in the Federalist Papers, we find the philosophical intelligence, the political courage and the candid self-awareness to expose how narrow interest and pettiness can stand in the way of solutions. If anything has changed in more than two centuries, it’s that we seem to have fewer Madisons, Hamiltons and Jays front and center in our national discourse:

A torrent of angry and malignant passions will be let loose. To judge from the conduct of the opposite parties, we shall be led to conclude that they will mutually hope to evince the justness of their opinions, and to increase the number of their converts by the loudness of their declamations and the bitterness of their invectives.

An enlightened zeal for the energy and efficiency of government will be stigmatized as the offspring of a temper fond of despotic power and hostile to the principles of liberty. An over-scrupulous jealousy of danger to the rights of the people, which is more commonly the fault of the head than of the heart, will be represented as mere pretense and artifice, the stale bait for popularity at the expense of the public good.

It will be forgotten, on the one hand, that jealousy is the usual concomitant of love, and that the noble enthusiasm of liberty is apt to be infected with a spirit of narrow and illiberal distrust. On the other hand, it will be equally forgotten that the vigor of government is essential to the security of liberty; that, in the contemplation of a sound and well-informed judgment, their interest can never be separated; and that a dangerous ambition more often lurks behind the specious mask of zeal for the rights of the people than under the forbidden appearance of zeal for the firmness and efficiency of government.