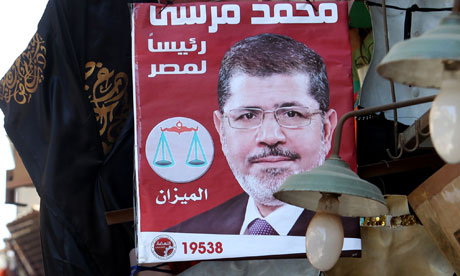 It is Gadhafi, Qaddafi, Kadafi, Gaddafi, Gadafy all over again. Except that the former Prime Minister of Libya is dead, while the President of neighboring Egypt is very much alive and at the center of global affairs.

The English version of the official Egyptian information website lists the President as Mohammad Mohamed Morsy al-Ayat. That is the way they are writing the name in the Latin alphabet. And therein lies a problem.

Egypt, Libya and most other countries in the region are Arabic-speaking and Arabic-writing. As with Hebrew—another important language in the region, though with far fewer speakers—transliterating the words into English spelling and vocalization is an adventure, and sometimes a pretty imprecise task.

News organizations seem to have settled on a consensus for the spelling of his first name as Mohamed—though as one of the most popular names in the world, it has naturally led to variants including Mohammad, Muhammad, Muhamme, Mohamed, Mohammed.

(For language junkies, other common Arabic names share the three-consonant root of  H-M-D, meaning “praise.” This is at the base of many commonly-heard names beside Mohamed, including Hamid, Ahmed, Mahmud, and others that are often in the news.)

What news organizations can’t seem to agree on is how to spell the President’s last name. As mentioned, the official Egyptian site says “Morsy,” so CNN, Time and a few others are going that way. The BBC and Reuters have decided on “Mursi” (it must be a Brit thing, some special privilege left over from colonial days, though the BBC has taken the extra step of adding an “m” to his first name: Mohammed).

By and large though, according to the New York Times and most others, the President of Egypt is Mohamed Morsi.

Does it matter? How we deal with him and his country matters much more in this dynamic time than how we spell his name in English, just as it is more important to act wisely than to spell correctly when dealing with China or any of the other countries that don’t speak English and don’t even bother to use our alphabet. It’s just a nice lesson in globalism, about how what we know is small compared to what we have to learn.

4 Comments to “Have Morsy Morsi Mursi”