Bobby Kennedy: To Strive and Not To Yield 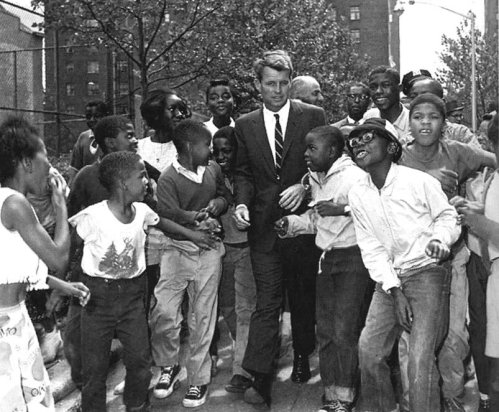 It seems useless to add to the volume of words about Bobby Kennedy. Not as many words as those devoted to his brother, who was, after all, President. After all, Bobby Kennedy was not President, and maybe would never have been. Maybe destiny planned all along to serve us up Richard Nixon. Maybe that Kennedy presidency could never live up to expectations or aspirations. We have learned that he was not a personal or political saint, but that was not a surprise. Saints belong in churches, not politics. We want and need heroes, which often means tragic ones. Bobby Kennedy was that and more.

For those unfamiliar with his life and career, here is the condensed version, courtesy of Congress:

KENNEDY, Robert Francis,  (brother of John Fitzgerald Kennedy and Edward Moore Kennedy, grandson of John Francis Fitzgerald, uncle of Patrick J. Kennedy, and father of Joseph Patrick Kennedy II), a Senator from New York; born in Boston, Suffolk County, Mass., November 20, 1925; graduated from Milton (Mass.) Academy; served in the United States Navy Reserve 1944-1946; graduated from Harvard University in 1948 and from the University of Virginia Law School in 1951; admitted to the Massachusetts bar in 1951; attorney, Criminal Division, Department of Justice 1951-1952; campaign manager for John F. Kennedy’s election to the United States Senate in 1952; assistant counsel, Senate Permanent Subcommittee on Investigations 1953; assistant counsel, Hoover Commission 1953; chief counsel to the minority, Senate Permanent Subcommittee on Investigations 1954, and chief counsel and staff director 1955; chief counsel of Senate Select Committee on Improper Activities in the Labor or Management Field 1957-1960; campaign manager for John F. Kennedy’s election to the Presidency in 1960; Attorney General of the United States from January 1961, until his resignation September 3, 1964, to be a candidate for the United States Senate; elected as a Democrat from New York to the United States Senate and served from January 3, 1965, until his death; died from the effects of an assassin’s bullet at Los Angeles, Calif., June 6, 1968, while campaigning for the Democratic presidential nomination; interment in Arlington National Cemetery, Arlington, Va.

Bobby Kennedy was a lover of literature and poetry. He frequently quoted the poem Ulysses by Alfred, Lord Tennyson. It is the tale of the old warrior Ulysses, who eschews comfort for mission. He has already sacrificed family life for duty, and he can’t help but set out one more time. It is not about glory, but about the dullness of a life of ease and about fiercely pursuing a dream until the end of days.

The poem closes with one of the great calls to action in the English language, both realistic and idealistic. “That which we are, we are,” Ulysses says. Bobby Kennedy was what he was.

This is how it ends: Bobby Kennedy giving a victory speech after his winning the California Presidential primary. All these years later, the divisions he speaks about seem just as present and pressing as ever. Could he have healed them then? Could he heal them now? Not too late to seek a newer world:

I think we can end the divisions within the United States. What I think is quite clear is that we can work together in the last analysis. And that what has been going on with the United States over the period of that last three years, the divisions, the violence, the disenchantment with our society, the divisions—whether it’s between blacks and whites, between the poor and the more affluent, or between age groups, or in the war in Vietnam—that we can work together. We are a great country, an unselfish country and a compassionate country. And I intend to make that my basis for running.

Update: A check mid-day on June 6 shows that a Google News search for “Bobby Kennedy” results in 7 hits and a search for “Robert F. Kennedy” finds 24, and some of those concern gossip about his son Robert F. Kennedy, Jr. It might be that the 44th anniversary of any event is less important than the rounder numbers like 40 or 50. Besides, we aren’t obliged to pay attention to anything, present or past. There is some tendency, not only today but maybe always, to dismiss looking back at pivotal events as pointless nostalgia. But history is not nostalgia, a confusion related to the very current idea that trivia is news. This endless political season is filled with lots of lesser mortals on all sides, not indictable because they are flawed, but because their flaws so outweigh their nobility. The point of the post is to remind us that this doesn’t have to be true, and there was a time when it wasn’t, and might yet be again.