Tag: The Fire Next Time

James Baldwin—My Dungeon Shook: Letter to My Nephew on the One Hundredth Anniversary of the Emancipation 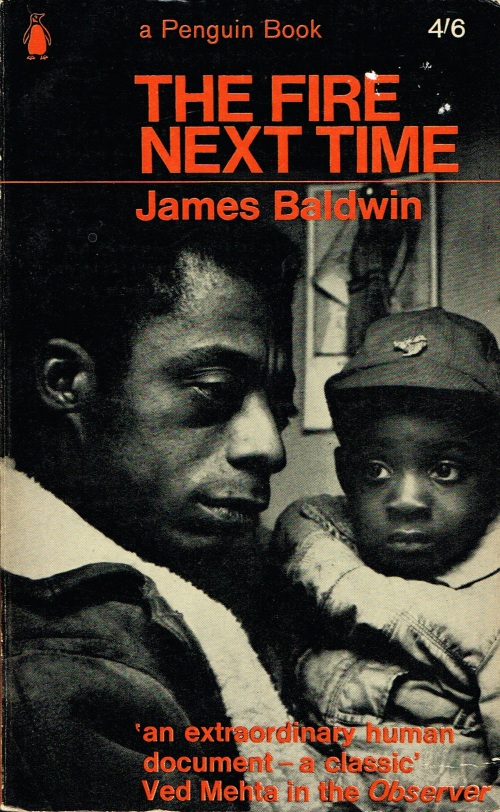 It would be obvious and appropriate to quote Martin Luther King Jr. today. Instead, though, I offer an excerpt from James Baldwin’s The Fire Next Time, one of the great literary works on black America by one of America’s greatest writers. (For those who keep track of such things, the book has earned 343 Amazon reviews, with a rating of 4.8.)

The book includes a brief essay entitled My Dungeon Shook: Letter to My Nephew on the One Hundredth Anniversary of the Emancipation. Written in 1962, before the Civil Rights Act and the forward but fitful evolution of American society, its power is undiminished in the face of unfinished business.

I have begun this letter five times and torn it up five times. I keep seeing your face, which is also the face of your father and my brother. Like him, you are tough, dark, vulnerable, moody—with a very definite tendency to sound truculent because you want no one to think you are soft. You may be like your grandfather in this, I don’t know, but certainly both you and your father resemble him very much physically. Well, he is dead, he never saw you, and he had a terrible life; he was defeated long before he died because, at the bottom of his heart, he really believed what white people said about him….

I know what the world has done to my brother and how narrowly he has survived it. And I know, which is much worse, and this is the crime of which I accuse my country and my countrymen, and for which neither I nor time nor history will ever forgive them, that they have destroyed and are destroying hundreds of thousands of lives and do not know it and do not want to know it. One can be, indeed one must strive to become, tough and philosophical concerning destruction and death, for this is what most of mankind has been best at since we have heard of man. (But remember: most of mankind is not all of mankind.) But it is not permissible that the authors of devastation should also be innocent. It is the innocence which constitutes the crime….

This innocent country set you down in a ghetto in which, in fact, it intended that you should perish. Let me spell out precisely what I mean by that, for the heart of the matter is here, and the root of my dispute with my country. You were born where you were born and faced the future that you faced because you were black and for no other reason. The limits of your ambition were, thus, expected to be set forever. You were born into a society which spelled out with brutal clarity, and in as many ways as possible, that you were a worthless human being. You were not expected to aspire to excellence: you were expected to make peace with mediocrity. Wherever you have turned, James, in your short time on this earth, you have been told where you could go and what you could do (and how you could do it) and where you could live and whom you could marry. I know your countrymen do not agree with me about this, and I hear them saying, “You exaggerate.” They do not know Harlem, and I do. So do you. Take no one’s word for anything, including mine—but trust your experience. Know whence you came. If you know whence you came, there is really no limit to where you can go. The details and symbols of your life have been deliberately constructed to make you believe what white people say about you. Please try to remember that what they believe, as well as what they do and cause you to endure, does not testify to your inferiority but to their inhumanity and fear….

For this is your home, my friend, do not be driven from it; great men have done great things here, and will again, and we can make America what America must become. It will be hard, James, but you come from sturdy, peasant stock, men who picked cotton and dammed rivers and built railroads, and, in the teeth of the most terrifying odds, achieved an unassailable and monumental dignity. You come from a long line of great poets, some of the greatest poets since Homer. One of them said, The very time I thought I was lost, My dungeon shook and my chains fell off.

Newark and Detroit: The Long Hot Summer of 1967

The last post about James Baldwin’s The Fire Next Time (1963) skipped a beat about what happened next. What happened in America was the race riots between 1964 and 1966 (including Watts in Los Angeles), culminating with the so-called Long Hot Summer of 1967. During that summer, among the many cities affected, the two disturbances that stand out are Newark and Detroit.

Baldwin did not overstate any prophetic intention in his book. Instead, he simply opened with this epigraph, from which he took the book’s title:

God gave Noah the rainbow sign,
No more water, the fire next time!

Newark, July 12-17, began with the arrest of a black cabdriver for passing a police car. The riots left 26 dead and hundreds injured.

There are at least three reasons we don’t hear much or talk much about that summer in the context of Ferguson.

We are abysmally ahistorical. If it isn’t in the latest Twitter feed, it may already be old news. Things that happened forty or fifty years ago might as well be from the Middle Ages.

We want to highlight and not overshadow the clear progress that has been made. Progress to be sure, as reflected in the photo of a black President talking to a black Attorney General about the events in Ferguson.

We are afraid. Afraid that the progress we have made may be as illusory as it is real. Afraid that we solved the easier problems, leaving us with stubborn, intractable ones that are beyond comfortable solutions. Afraid that we may not be as good as we think we are. Mostly afraid that history is TMI, telling us way more than we want to know, showing us images not from the distant past but from tomorrow.

Ferguson and The Fire Next Time

James Baldwin’s The Fire Next Time may be the best and most eloquent statement of relations between whites and blacks in America ever written. From the publisher:

The appearance of The Fire Next Time in 1963, just as the civil rights movement was exploding across the American South, galvanized the nation and continues to reverberate as perhaps the most prophetic and defining statement ever written of the continuing costs of Americans’ refusal to face their own history. It became a national bestseller, and Baldwin was featured on the cover of Time magazine. Critic Irving Howe said that The Fire Next Time achieved “heights of passionate exhortation unmatched in modern American writing.”

Baldwin was one of the great writers of his or any other American generation. He shouldered the burden of being a triple threat to America of the 1960s—a black man, a brilliant and outspoken intellectual, and gay. This he did with unequaled prose grace, and this work and others are required reading for anyone who wants or claims to be a writer.

The first of the two essays is My Dungeon Shook: Letter to My Nephew on the One Hundredth Anniversary of the Emancipation. Brief and unforgettable, it is a summary of how things are and why his teenage namesake cannot give up and in. It does no justice to this book to excerpt it; it stands as a whole that must be read—not the least of all because with the real progress we have made, we are foolish and destructive to over-measure how far we have come. But here is how the essay closes:

And if the word integration means anything, this is what it means: that we, with love, shall force our brothers to see themselves as they are, to cease fleeing from reality and begin to change it. For this is your home, my friend, do not be driven from it; great men have done great things here, and will again, and we can make America what America must become. It will be hard, James, but you come from sturdy, peasant stock, men who picked cotton and dammed rivers and built railroads, and, in the teeth of the most terrifying odds, achieved an unassailable and monumental dignity. You come from a long line of great poets, some of the greatest poets since Homer. One of them said, “The very time I thought I was lost, My dungeon shook and my chains fell off.”