Out of the Past (1947) is the best of all American film noir movies. It contains dozens of lines memorable and quotable, dialogue suffused with fatalistic wisdom.

Jeff and Kathie are at a roulette table. She is losing.

JEFF: That isn’t the way to play it.

JEFF: Because it isn’t the way to win.

KATHIE: Is there a way to win?

The lives of Americans are in the hands of a loser. At this point in response to the pandemic, it isn’t clear exactly what “winning” means, but it is for the moment out of reach. What remains is for the man at the roulette table to figure out is how to lose more slowly.

Spoiler alert: At the end of Out of the Past, both Jeff and Kathie are dead. It is after all film noir.

Do not inject chicken soup to cure COVID-19, even though it does ease symptoms of a cold

But that in no way suggests that injecting chicken soup is recommended as a cure or preventative for COVID-19. It should not be necessary to say this, but given the dangerous misinformation that is current:

Do not inject chicken soup, for COVID-19 or for any other reason.

After the Virus: To seek a newer world

We do not and should not like paying the tragic price the Virus is demanding. But the current catastrophe, so far from over, does offer an opportunity to review, revise and, in some areas and in some ways, to begin again.

I’ve written before about the leaders I miss. No one more than Bobby Kennedy. He was a hard-nosed pragmatist and an idealist, a lover of literature and poetry. He frequently quoted the poem Ulysses by Alfred, Lord Tennyson. It is the tale of an old warrior who fights the urge for ease and comfort, and sets out one more time to pursue a dream. The poem closes:

If You Pray, Pray for Dr. Fauci

If you have been paying attention, you know that 79-year-old Dr. Fauci has been the trusted national voice of fact and reason in response to the pandemic. He is currently director of the National Institute of Allergy and Infectious Diseases, and has served six presidents.

In the interview, we learn that Dr. Fauci has been working 18-hour days, and at one point worked four or five days on three hours sleep each day. Because as a doctor, scientist and public servant he wants us to understand, wants us to behave appropriately, and wants as few Americans as possible to suffer and maybe die.

Part of that interview:

Thank God the Doctor Is In

WASHINGTON — It’s not easy being a national treasure.

“I’m exhausted,” confessed Tony Fauci when I reached him Thursday evening in the middle of another 18-hour workday.

“I have changed my tune a bit, probably thanks to my wife,” said the 79-year-old director of the National Institute of Allergy and Infectious Diseases. “About a week ago, I was going about four or five days in a row on about three hours of sleep, which is completely crazy, ’cause then I’ll be going on fumes. The last couple of nights, I’ve gotten five hours’ sleep, so I feel much better.”

He said he misses the endorphins of power walking, and he is wracked when he gets home at midnight and it’s too late to answer calls and emails.

“I gotta get rid of this guilt feeling,” he murmured about that moment’s 727 emails.

He said he has not been tested for the coronavirus but takes his temperature every day and usually has it taken another couple times before White House press conferences and meetings in the Oval.

When I spoke with him, he had been missing from the White House briefing for two days and Twitter blew a gasket, with everyone from Susan Rice to Laurence Tribe seeking an answer to the urgent query, “Where is Dr. Fauci?”

Donald Trump, the ultimate “me” guy, is in a “we” crisis and it isn’t pretty. The president is so consumed by his desire to get back his binky, a soaring stock market, that he continues to taffy-twist the facts, leaving us to look elsewhere — to Dr. Fauci and governors like Andrew Cuomo and Gavin Newsom — for leadership during this grim odyssey.

Dr. Fauci chuckled at speculation that he was banished due to his habit of pushing back on Trump’s hyperbolic and self-serving ad-libbing.

“That’s kind of funny but understandable that people said, ‘What the hell’s the matter with Fauci?’ because I had been walking a fine line; I’ve been telling the president things he doesn’t want to hear,” he said. “I have publicly had to say something different with what he states.

The first time I talked to Dr. Fauci was during a panic in the mid-80s about stopping another virus, the cause of the heartbreaking AIDs crisis. Then, as now, he was honest, brave and innovative. He told me that he tries to be diplomatic when he has to contradict the president about what “game-changer” cures might be on the horizon and whether everyone who wants to be tested can get tested.

“I don’t want to embarrass him,” the immunologist says, in his gravelly Brooklyn accent. “I don’t want to act like a tough guy, like I stood up to the president. I just want to get the facts out. And instead of saying, ‘You’re wrong,’ all you need to do is continually talk about what the data are and what the evidence is.

On Friday, a trigger-happy Trump was so quick to talk up the fabulous possibilities of an antimalarial drug in combating the virus that Dr. Fauci had to pump the brakes, taking the microphone to explain that we do not know yet because controlled testing is needed.

The president returned to the lectern to press his unscientific case and compliment himself: “I’m a smart guy,” he said. “I feel good about it. And we’re going to see. You’re going to see soon enough.”

Probably thinking about all his government staffers working round-the-clock, Dr. Fauci could not help rubbing his forehead and cheek — going against his own advice to the public — when Trump cracked a joke about the “Deep State Department.”

Though the scientist listens respectfully when the president and the vice president are talking, he somehow manages to emit an “Oh my God, please don’t say that” vibe when the two men scamper over the line. When Mike Pence went into false-hope overdrive, saying, “I just can’t emphasize enough about the incredible progress that we have made on testing,” Dr. Fauci and Dr. Deborah Birx, the administration’s virus response coordinator, exchanged a whispered aside that sent the internet into a frenzy.

Dr. Fauci assured me that, despite their crosscurrents and an early overconfidence about how easy it would be to control the path of the virus, the president “absolutely” now gets the threat of “the invisible enemy,” as Trump calls the virus.

The Pharmaceutical Research and Manufacturers of America have a new public relations campaign. It is no secret that Big Pharma is not wildly popular, given the perception that pricing is surreal and marketing is out of control.

The inarguable point of the ad is that pharmaceuticals save and extend lives. To make that point, it uses the most moving poem of Dylan Thomas, one of the great modern poets:

Do not go gentle into that good night,
Old age should burn and rave at close of day;
Rage, rage against the dying of the light.

Though wise men at their end know dark is right,
Because their words had forked no lightning they
Do not go gentle into that good night.

Good men, the last wave by, crying how bright
Their frail deeds might have danced in a green bay,
Rage, rage against the dying of the light.

Wild men who caught and sang the sun in flight,
And learn, too late, they grieved it on its way,
Do not go gentle into that good night.

Grave men, near death, who see with blinding sight
Blind eyes could blaze like meteors and be gay,
Rage, rage against the dying of the light.

And you, my father, there on that sad height,
Curse, bless, me now with your fierce tears, I pray.
Do not go gentle into that good night.
Rage, rage against the dying of the light.

My request is emphatic and simple. Whatever the merits or demerits of Big Pharma, find some other way to make your case, and please leave Dylan Thomas out of it. He is way out of your league.

Healing and Magic: We Are Not Alone 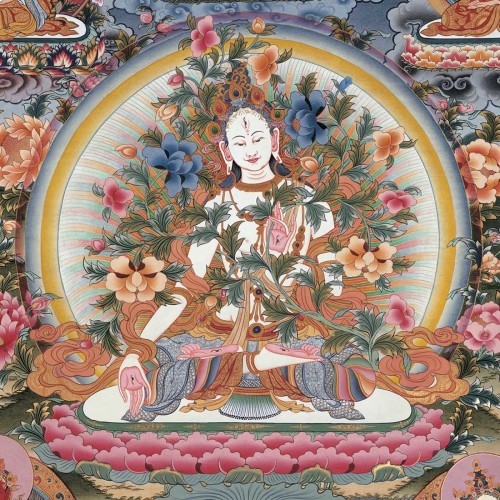 All of our religious traditions—Judaism, Buddhism, Christianity, and all others—include an element of healing. Healing of body, heart and mind. The Gospels, for example, contain many important stories about healing, from curing chronic illness to reversing death itself.

We invoke the power to heal in various ways. In Judaism, the Mi Shebeirach is recited:

May the one who blessed our ancestors, Abraham, Isaac and Jacob, Sarah, Rebecca, Rachel and Leah, bless and heal those who are ill. May the Blessed Holy One be filled with compassion for their health to be restored and their strength to be revived. May God swiftly send them a complete renewal of body and spirit, and let us say, Amen.

In Buddhism, White Tara, an important embodiment of compassion, is invoked:

The liberator of suffering shines light upon me to create an abundance of merit and wisdom for long life and happiness.

Is this magic we are engaged in? If you take magic to be a call to illegitimate and evil powers, as some traditions do, then this might have to be classified as something else. If you take magic to be the recognition of a seeming powerlessness in the face of things as they are and an attempt to borrow and employ the power we believe in, then magic it is.

This invocation of the power to heal—by ourselves, in a family, in a community—is a way of practicing that we are not alone. When healing is needed, that is something we want to know.