“I think God calls all of us to fill different roles at different times and I think that he wanted Donald Trump to become president. And that’s why he’s there.”
Sarah Sanders, White House Press Secretary, interviewed by Christian Broadcasting Network

Some people believe that that they know the will of God and that God intervenes in worldly affairs according to that will, in any and all matters. In this view, God exercises preference for particular outcomes—from presidential elections to football games to epidemic diseases. God wants Trump to be president. God wants the New England Patriots to win the Super Bowl. God wants to punish homosexuals with AIDS. And so on.

If, like Sarah Sanders, you claim to know God’s will and know that he wants Trump, consider this. If you sum up all that Trump has done and said so far, in his life and his presidency, does God by his “choosing” Trump endorse all of that? That is, under the Sanders theology, if we know Trump, we know his benefactor God.

Leaving us with this disturbing question: Just what kind of God does Sanders believe in?

A professor at Wheaton College may be dismissed for saying that Christian and Muslims worship the same God.

There is so much that could be said about this.

About the history of American evangelicalism, of which Wheaton is a part. How it began as an open and activist socially liberal Christian movement and has ended up in some instances a radically conservative and strictly exclusivist movement.

The concept of one God was a revolution in civilization. The earlier belief in an entourage of gods, greater and lesser, has been mostly replaced by the one. (Whether that one might be three-in-one goes back to the theology complexities mentioned above, so let’s leave that for now.)

It is no wonder that after thousands of years with religion as a standard way of life, more people are rejecting it than ever. Because if there is a God, and if religions have sprung up on his behalf (with or without his blessing), that God and those religions can look spectacularly ridiculous in the eyes of good people who want nothing but good for people. And because if God really cares about all this very human nonsense, a growing number of people want nothing to do with him or his religions. And who can blame them?

God and the H-Bomb

The Hydrogen Bomb is in the news, thanks to North Korea’s questionable claim that they have one and have tested it.

In the years following World War 2, the H-Bomb was big news. Big, just like The Bomb. The world had seen the destructive power of the A-Bomb used at Hiroshima and Nagasaki. The H-Bomb made the A-Bomb look like a stick of dynamite. Where once there was the power to destroy cities, we could now destroy the world. And ourselves. We were as gods, at least in our punishing might.

In 1961, a book called God and the H-Bomb was published. It’s not in print, but you might find a copy used or in a library, as I did a few years ago. The cover carries this question: “What counsel do our spiritual leaders offer in response to mankind’s greatest challenge?”

The roster of contributors is an impressive list of thinkers, some of whom are still recognized names, some less familiar. Paul Tillich, Martin Buber, Pope Pius XII, and so on.

That’s not what this 55-year-old book is about. It is about the moral and spiritual dimensions of the H-Bomb. That is reflected in the titles of the pieces. The power of self-destruction. War and Christian conscience. Fifteen years in hell is enough. Thy neighbor as thyself. The road of sanity.

The foreword is by Steve Allen, who is a little remembered as a significant television personality, but less as one of the most entertaining and brilliant public intellectuals of the middle twentieth century. Here’s what he writes:

That our nation is in the throes of moral collapse of serious dimensions is, apparently, no longer a debatable conclusion. Liberal and conservative spokesmen vie to see who shall express the conviction most vigorously. Churchmen and secularists, too, agree that we have fallen upon evil days. These various groups naturally differ as to the reasons for the situation, but that it exists no one seems to doubt….

Will our nation be guided in this dread hour by the moral code it professes to honor?

WWJDAB: What Would Jesus Do About Guns?

If Jesus returned, and found America flooded with guns, and saw so many people drowning in that flood, what would he do?

A lot of people claim to speak for Jesus, but I am not one of them. Still, I have a guess, or maybe just a hope. Jesus would make the guns disappear. He might—might—later give them back to some who were hunting to put food on their table. He might not give them back to those who use them for sport, explaining that golf is more challenging and that far fewer people are killed by golf balls and golf clubs.

Almost immediately, Jesus would be criticized for taking away a God-given freedom. God blessed the world with America, God blessed America with a Constitution, and God blessed the Constitution with a Second Amendment. Jesus might reply that he had a better idea of what God blessed and what God had in mind. And that what he didn’t have in mind was millions of people running around with deadly weapons and often wantonly shooting thousands of others. God also isn’t keen on Kindergarten teachers packing heat while shepherding five-year-old children. Jesus would close by reminding folks that it is the peacemakers who are blessed, not the gun makers.

By then, it would be too late. Nobody would be listening. As if they ever did.

When Orthodox Jews or Muslims are in charge, bacon, ribs, and all sorts of other things will be made illegal.

Of course, that will never happen. Not because Orthodox Jews or Muslims will never take control of American democracy (anything’s possible). But because the U.S. Constitution—that imperfectly perfect protector of individual rights—would not permit it.

Those who say there is some kind of higher law than that in the civic arena are misinformed, or in some cases, such as Ted Cruz who should know better, strategically mistaken. The question those folks have to answer is this: If there is higher law than the Constitution, whose law is it? If it’s “God’s” law, recall that God talks to lots of people in lots of religious traditions, and apparently isn’t always heard to say the same thing to everyone. It will shock some Christians to learn that God has been speaking to Jews for thousands more years, and while there seemed to have been plenty of talk about a messiah, nothing to indicate that one actually arrived. Or asked county clerks in Kentucky to stop issuing marriage licenses. Or told presidential candidates who claim to believe in law and order to defy the law of the law of the land. In his name. Amen.

In the Beginning, Again

This Sabbath, the annual cycle of Torah readings starts all over again. Again. Back to the beginning. Genesis (Breisheit), Chapter 1.

In the beginning….Well, you probably know how it goes. But don’t be jaded by familiarity. And don’t avoid it or be put off by belief that this and all the Genesis stories that follow are neither history nor science. So what? These are big stories and we need big stories. Not to be used as clubs to beat us up (though there is that), but as invitations and portals to bigger things. If not, then why are so many watching Hunger Games or Downtown Abbey?

Instead of learned discourse, here is something much more fun. R. Crumb, one of the great comic artists (beginning with his classic underground comics in the 1960s—Mr. Natural, etc.), published his Book of Genesis Illustrated in 2010. 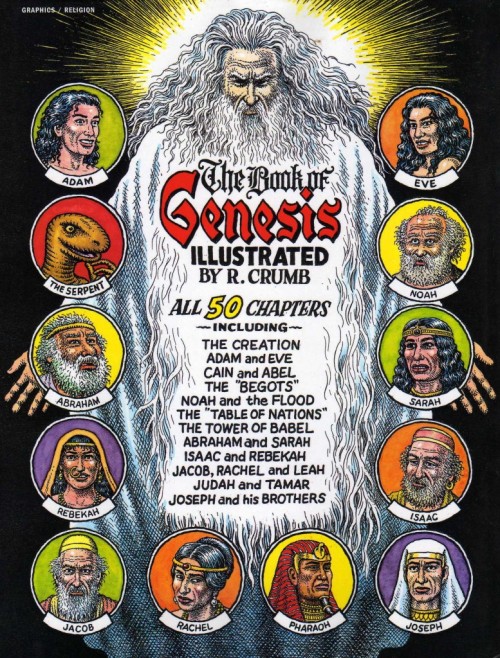 (If you don’t like pictures or Crumb’s illustrations, you might just try the excellent translation of Genesis that Crumb used, by Robert Alter)

Take a moment, whatever your inclinations, and allow yourself to be awed. Whatever you think is awesome, the sudden appearance of everything is more awesome than that, however you explain it. And for those who are waiting to see the Big Guy with the long beard–you know you’ve just gotta have it–here it is. 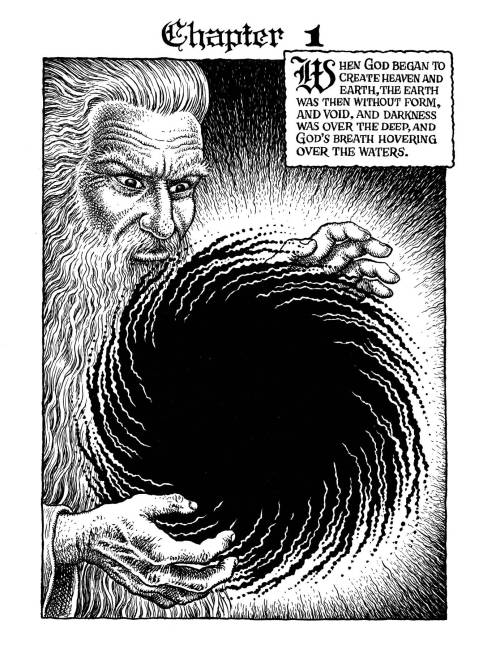 1. Whether working on a business report, legal brief, story or even a non-written creation, you have either had the privilege to edit others or have suffered the tough medicine of being edited.

2. All works are improvable. Ask God.

3. There is a difference between edits that are improvements and changes based on subjective sensibilities, though there is a gray area in between.

4. It is easiest to identify improvement editing when the creation is discretely functional and results are measurable, as with some sorts of advertising copy. Some would say readability and clarity fall into this functional category—that is, unless tortured readability is a creative choice and can be handled deftly. Ask Faulkner or Joyce.

5. Voice may be the hardest part of editing. It may also be the hardest part of writing. Even the most technical sorts of work can convey a distinctive voice—you will find this in textbooks, in legal articles, even in judicial rulings. Some writers don’t know abstractly what a distinctive voice is because they just naturally have one. Others work to develop it. That is the dual quandary for editors. If a writer has a voice, or the beginnings of one, you want to cultivate it without editing it away. If a writer doesn’t have much of a voice, there is a risk of the editor—who is often a pretty good writer too—to substitute a different voice entirely.

6. The Bible is the most importantly edited work in Western history, maybe in human history. Speaking of voice, imagine being the one responsible for editing the voice of God, Moses or Jesus. Yet somebody did. These editors took no credit, though it is fun to consider what those acknowledgements might look like. “And finally I’d like to thank my editor, without whom these transcripts of my speeches would not have the power that they do. JC.”