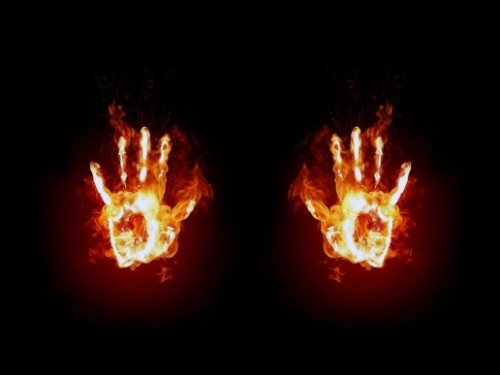 The same story about the Desert Fathers, told two ways. Why not fire?

Lot went to Joseph and said, ‘Abba, as far as I can, I keep a moderate rule, with a little fasting, and prayer, and meditation, and quiet: and as far as I can I try to cleanse my heart of evil thoughts. What else should I do?’ Then the hermit stood up and spread out his hands to heaven, and his fingers shone like ten flames of fire, and he said, ‘If you will, you can become all flame.’
The Desert Fathers: Sayings of the Early Christian Monks by Benedicta Ward

Abbot Lot came to Abbot Joseph and said: Father, according as I am able, I keep my little rule, and my little fast, my prayer, meditation and contemplative silence; and according as I am able I strive to cleanse my heart of thoughts: now what more should I do? The elder rose up in reply and stretched out his hands to heaven, and his fingers became like ten lamps of fire. He said: Why not be totally changed into fire?
The Wisdom of the Desert by Thomas Merton

Merton on the desert: We cannot escape anything by consenting tacitly to be defeated.

From Thomas Merton, Thoughts in Solitude:

The Desert Fathers believed that the wilderness had been created as supremely valuable in the eyes of God precisely because it had no value to men. The wasteland was the land that could never be wasted by men because it offered them nothing. There was nothing to attract them. There was nothing to exploit. The desert was the region in which the Chosen People had wandered for forty years, cared for by God alone. They could have reached the Promised Land in a few months if they had travelled directly to it. God’s plan was that they should learn to love Him in the wilderness and that they should always look back upon the time in the desert as the idyllic time of their life with Him alone.

The desert was created simply to be itself, not to be transformed by men into something else. So too the mountain and the sea. The desert is therefore the logical dwelling place for the man who seeks to be nothing but himself—that is to say, a creature solitary and poor and dependent upon no one but God, with no great project standing between himself and his Creator.

This is, at least, the theory. But there is another factor that enters in. First, the desert is the country of madness. Second, it is the refuge of the devil, thrown out into the “wilderness of upper Egypt” to “wander in dry places.” Thirst drives man mad, and the devil himself is mad with a kind of thirst for his own lost excellence—lost because he has immured himself in it and closed out everything else.

So the man who wanders into the desert to be himself must take care that he does not go mad and become the servant of the one who dwells there in a sterile paradise of emptiness and rage….

The desert is the home of despair. And despair, now, is everywhere. Let us not think that our interior solitude consists in the acceptance of defeat. We cannot escape anything by consenting tacitly to be defeated. Despair is an abyss without bottom. Do not think to close it by consenting to it and trying to forget you have consented.